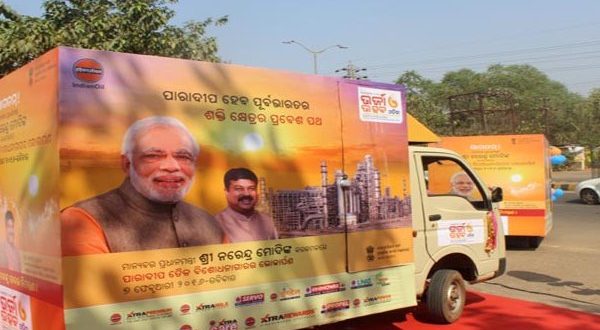 BHUBANESWAR: As barely few days left for the inauguration of Rs 35,000-crore oil refinery project at Paradip by Prime Minister Narendra Modi, both the ruling BJD and BJP are leaving no stone unturned to show their strength at the scheduled meeting.

Amidst political slugfest over the project, the two political parties are trying to gather a maximum number of people at the event only to chant slogans for their top party bosses.

While Petroleum minister Dharmendra Pradhan is scheduled to visit Paradip and take stock of the situation ahead of Modi’s visit, the ruling BJD held a preparatory meet at Paradip on Friday to chalk out its plan.

BJD vice-president and cooperation minister Damodar Rout said, “As desired by the Chief Minister, the meeting decided to accord a warm welcome to Modi at the event and ensure its success.”

However, the saffron party alleged the BJD has been trying to hijack the inaugural programme from the BJP.

“The ruling BJD has been claiming to provide subsidy rice for one rupee a kilo while it was part of the central subsidy given to the poor people in the state. Likewise, they are also trying to show that the BJD is organising the Oil refinery inauguration event,” said BJP state unit president Basant Panda.

“If they (BJD leaders) try to hijack the programme, people of the state will give them a befitting reply in the coming days,” he added.

However, the ruling BJD refuted the allegations and sought to blame the BJP minister Pradhan for violating the Supreme Court guidelines and trying to publicise his image by spending public money.

Rout said the launch of a publicity van with the poster of Dharmendra Pradhan in parts of the state, ‘‘is utilising the public funds for the party’s propaganda. If they have guts, they should come to the field after IOCL event and then we will see who is right and has public support.”

Rout said most of the constituencies in Paradip and its nearby areas have a strong BJD presence, and it is evident that they will attend the event. “They will come to participate in the event which the PM and CM will attend, and it is not meant to show BJD strength,” the senior ruling party leader said.