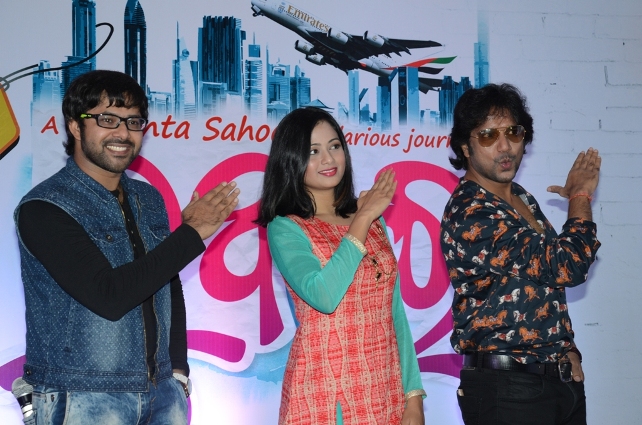 Bhubaneswar: The music of Sabyasachi-Archita-Buddhaditya starrer “Bye-Bye Dubai” was released here on Monday.

The film is produced by AkshayParija and directed by renowned Odia film director Basant Sahoo.

Bye Bye Dubai was launched with the posters and promotional teasers along with the ritualistic unveiling of the Music CD.

“The film songs and the background score has been composed so that it complements film’s different moods. Music director Bikas Das and Dr. Rajani Ranjan who made the music arrangements have done a commendable job”, said Akshay Parija, a national award winner.

Many song sequences and film scenes have been extensively shot in Dubai, the first of its kind in Ollywood.

“Since Dubai is considered larger than life, the songs are composed in a way to match that feeling. Director Basant Sahoo and DOP Biraja Kar’s cinematography wonderfully compliments the songs”, said Bikas Das.

Director Basant Sahoo seemed all excited about the film. “Dubai is hugely captured in this movie. AKP always brings some wow factor in his every movie. He believes in creating history. This time, we have reintroduced the artists in different ways,” he said.

The event saw famous Odia celebrities from the film circuit and the entire media appreciating the efforts in the movie promotional. In a move to ensure the film’s music reaches a larger audience in a more organized manner, Amara Muzik along with Techzone has acquired the film’s music rights and will promote it accordingly on the digital platform.