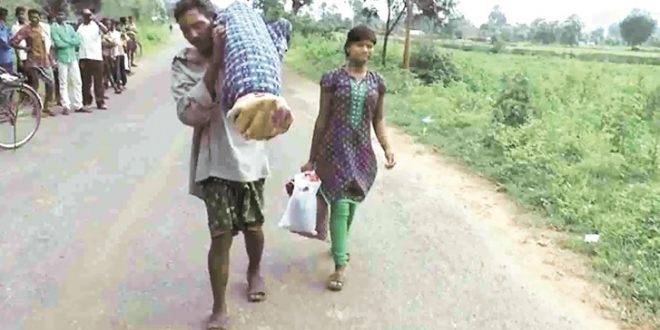 Bhubaneswar: The Kalahandi district administration on Thursday gave a clean chit to the hospital authorities to the shocking incident of a tribal man taking his wife’s body home on his shoulder after hospital authorities allegedly denied him a mortuary van or an ambulance.

Sub-collector Bhawanipatna on Thursday submitted an inquiry report to district collector Brundha D. on the incident.

Earlier, the Collector directed to conduct an inquiry into the incident.

“According to the preliminary inquiry, the tribal man took the body without informing the hospital authorities. Even the doctors did not have completed the discharge procedures,” said the collector.

Notably, Dana Majhi walked 10 kilometers with his daughter carrying his wife’s body on his shoulder, after he failed to obtain a mortuary van or an ambulance from the hospital authorities.

His wife Amang Deis died of tuberculosis at the district headquarters hospital at Bhawanipatna on Wednesday.

Majhi wrapped the body of his wife in cloth and carried it on his shoulders while his 10-year old daughter accompanied him. Majhi walked to his village Melghara in Rampur block which is about 60 km from Bhawanipatna.

“The hospital authorities said that there are no vehicles. I pleaded with them saying I am a poor person and cannot afford a vehicle to carry my wife’s body. Despite repeated requests, they stated that they cannot offer me any help,” said Dana Majhi.

Meanwhile, Chief Minister Naveen Patnaik on Thursday launched the ‘Mahaparayana’ scheme to facilitate transporting dead bodies from government hospitals and government-affiliated hospitals to the residence of the deceased across the state.

Kalahandi District Collector said the local BDO had been asked to provide all assistance, as per the government provision, for the cremation of the deceased.