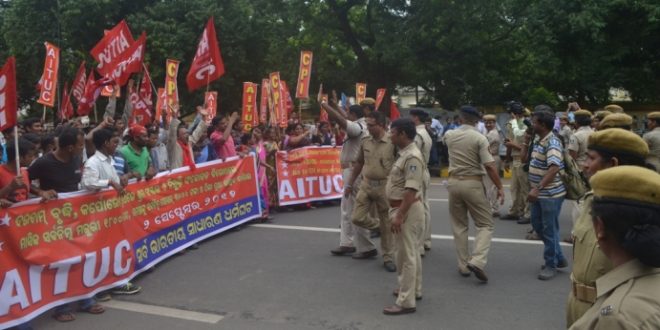 As many as ten central trade unions participated in the one-day strike. Both government and private sectors workers joined the strike pressing their 12-point charter of demands before the central government.

The protesters staged road blockade in several parts of the state affecting public transportation system. They also resorted to rail roko. As a result, many express, passenger and freight trains are stranded at various stations.

In Bhubaneswar and Cuttack, the members of the trade union blocked roads and burnt tyres. The protesters also resorted to strike in Berhampur, Rourkela, Sambalpur, Keonjhar, Rayagada, Dhenkanal, Jajpur, Angul and several other districts.

Passengers remained stranded at railway stations and bus stands. Auto-rickshaws and buses remained off the road. Besides, shops and other business establishments and some educational institutions remained closed during the shutdown.

The protesters also resorted to picketing at the government offices.

Chief Minister Naveen Patnaik came to state secretariat amid tight security while some ministers were seen coming on motorcycles.

The trade unions are demanding a minimum monthly wage of Rs 18,000 to workers, an end to privatization of PSUs, immediate action to control the price rise, etc.