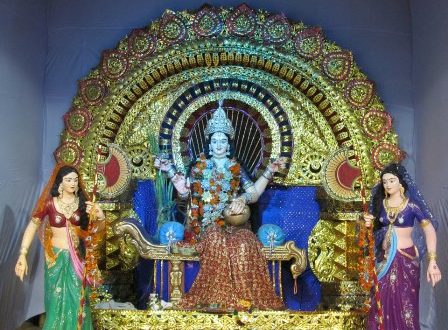 Kendrapara: Preparation is in full swing for the Laxmi puja in Kendrapara district. The puja will begin from Kumar Purnima.

Locals are now busy in painting the town with festive colors, which is one of the biggest festivity observed by the locals in this coastal district.

This year, about 66  puja pandals will come up in the Kendrapara town whereas 46 tableaus (medhas) will join the two-day immersion procession, which will be held from October 23.

CESU has been asked to provide uninterrupted power supply.

The district administration has made it clear to the puja organizers that high decibel loudspeakers, having more than 65 decibels sound output, would be synchronized.

Strict excise regulation and traffic arrangements are going to be followed from tomorrow   till the immersion procession. Adequate police personnel will be deployed,said Debendra Prasad Das, the District collector.

Meanwhile, the district administration has restricted the plying of all heavy goods vehicles from Kusunpur (chandol) to Pattamundai on State Highway -9(A) and Kendrapara Town during 7 am to 1 am from October 15 to 31.

The district police department has made tight security in order to ensure the puja a smooth and grand success, said Kendrapara SP Nitinjeet Singh.

Necessary security arrangements have also been made to guard the religious institutions in the district, he added.