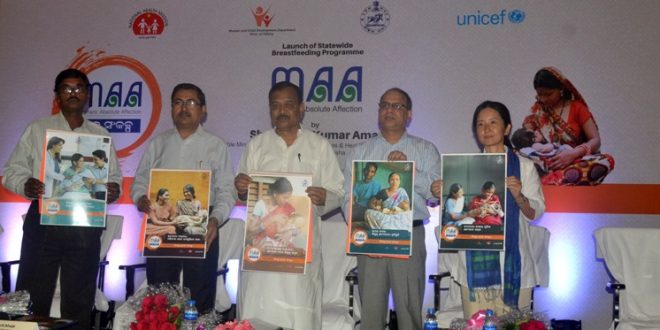 “I am hopeful that MAA, a program which has been launched nationwide will help in promoting breastfeeding habits among newborn and children. Because of huge benefits of breastfeeding, we have the responsibility to take up this program which will eventually reduce child mortality,” said Amat.

“It is a necessity in this modern time to collectively encourage and support breastfeeding. Breastfeeding is being given high importance in our health department and various programs are being undertaken to promote it,” he added.

Yumi Bae, Chief, UNICEF Odisha said, “Optimal infant and young child feeding practices are the easiest and most cost-effective way to prevent undernutrition among children. Breastfeeding not only provides infants nutrition, but also a close bonding with mothers, critical to their well-being.”

The MAA program aims to strengthen this powerful intervention and ensure the best start in life for all children. UNICEF is pleased to support this commitment of the state government and the roll-out of this important program, said the UNICEF Odisha chief.

The MAA program seeks to improve family and community awareness about the importance of early and exclusive breastfeeding; strengthen counseling of mother through ASHA workers and provide support to mothers in public health facilities on how to correctly breastfeed the baby.