Bhubaneswar: The Odisha unit of BJP has decided to hold a mega rally in the state, which will be attended by BJP national president Amit Shah.

The Maha Samabesh of BJP will be held on November 25 in Bhubaneswar. The party expects that the presence of Amit Shah would boost the morale of BJP workers ahead of the Panchayati raj elections in February 2017.

The state unit on Saturday held a preparatory meeting of BJP leaders at the party headquarters here to frame a roadmap for the next Panchayat elections.

Dharmendra Pradhan said, “We have invited the national president to grace the occasion. Bharatiya Janata Party will fight for the rights of the Odia people. A massive public awareness program has been decided. ”

“The Odia people are being deprived of their legitimate rights owing to an inefficient administration here. This will be the vital issue. The state government is very often resorting to tactics in a bid to hush up its inefficiency. That is the motto of the Samabesh,” he added. 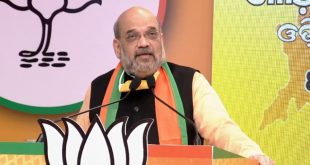