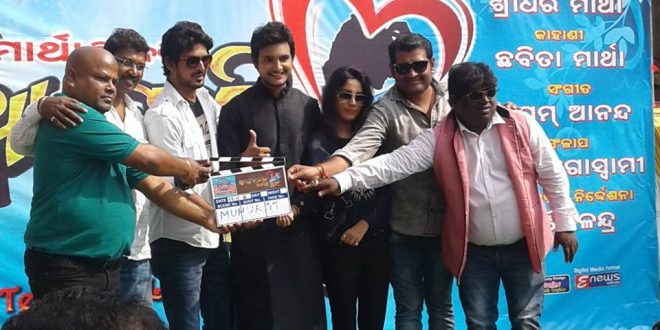 The star cast of the movie and several others of Ollywood industry were present during the Mahurat of the film.

Abhishek and Riya will be seen romancing in the Odia movie while comedy king Papu Pom Pom will add the ‘comedy tadka’.

This a love story with several twists and turns.

The story revolves around a rich girl Lekha (Riya), who is forced to leave home after falling in love with a middle-class guy Jeet (Aman). However, their love life does not last long as they face several disturbances. Later, the girl meets a rich guy Krish (Abhishek) and the plot turns towards its climax.

This is the debut film of actor Aman, who is a theater artist. He is very excited for this movie and excepting that audience will like his character.

Among others, veteran actors Bijay Mohanty, Mihir Das, Pintu Nanda and Salil Mitra will also be seen in this movie.

Katha Deli Matha Chhuin is produced under the banner of Range Royal Cinelab. The film is directed by Shailendra Parida and produced by Shridhara Martha. Music Director of the movie is Prem Anand and the dialogues are written by Bapu Goswami.