Did Odisha BJP know about demonetization before announcement?

Bhubaneswar: Before the demonetization by the Narendra Modi government, the Odisha BJP was on a land buying spree in various parts of Odisha. The BJP bought land in 18 districts of Odisha.

“Before note ban, BJP bought land in 18 districts of #Odisha & negotiations on for a few more places,” tweeted Odisha Congress.

The Congress party also shared some documents on social media, which shows that the state unit of BJP has brought land in different parts of the state.

Congress alleged that the market value of these parcels of land was much higher than was quoted in land deeds.

It said the possibility that the rest was paid from black money, not an uncommon practice in land deals, is not being ruled out.

Records of the deals show that the BJP had bought nearly two acres of prime land in Kendrapara district. The sale deed was executed in utmost secrecy with even local leaders of the party kept in the dark.

The two-acre plot in Kendrapara district is worth about Rs 45 lakh. It was bought in August by Surendranath Lath, the BJP’s in-charge of the 2014 Lok Sabha and assembly elections in Odisha. 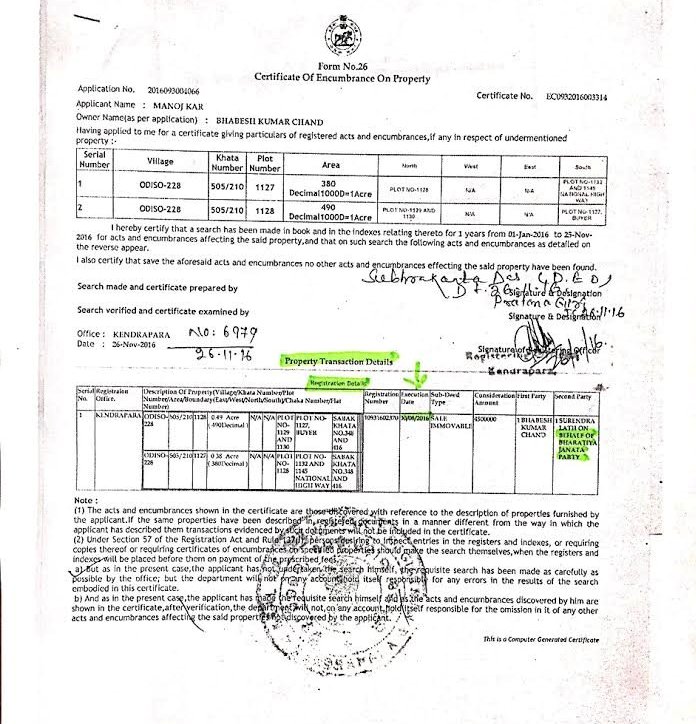 Another plot was bought in Jharsuguda. They have bought the land near Biju Patnaik Chhak at Badmal during the auction by a bank.

However, BJP state president Basant Panda clarified that the party has planned to purchase land in all the organizational district headquarters of the state.

He said the land purchasing has nothing to do with demonetisation.