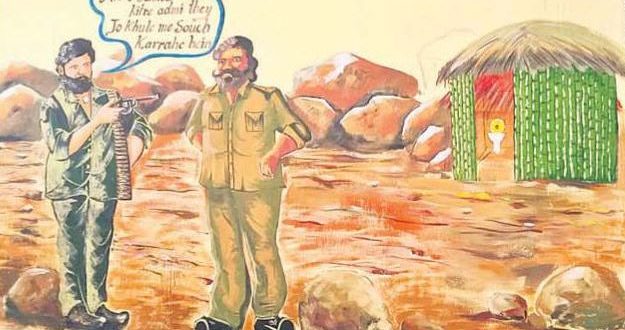 Bhubaneswar: In order to sensitize the people about the open defecation free society, the Bhubaneswar Municipal Corporation (BMC) in collaboration with a not-for-profit organization has started an initiative to paint public toilets with cartoon characters and other graphic images.

In a first, two public toilets near Janata Maidan have been painted by the artists of Bakul Foundation, a group that has dedicated itself to work for the noble cause. A plan to paint 53 such toilets in the city is under process.

“We have a plan to paint 27 public and 26 community toilets, which are in the pipeline to make the city look cleaner and greener Illustrative images in 53 yet-to-be-built toilets are also to be painted.” said Deputy Commissioner Srimanta Mishra, who is in-charge of the Swachh Bhubaneswar Abhiyaan Cell.

In one such toilet, an image of the popular villain from a Hindi film. Gabbar Singh is painted. He is seen to be asking Samba with a gun pointed at him, “Kittle aadmi the jo khule mein souch kar rahe the (how many were defecating in the open)?”

Sujit Mohapatra from the Foundation said, “What we wanted to do was to make each toilet look like a work of art. But we were clear that we did not want it to be didactic with heavy messages and slogans. We wanted the message to be delivered with a touch of subtlety in it.”