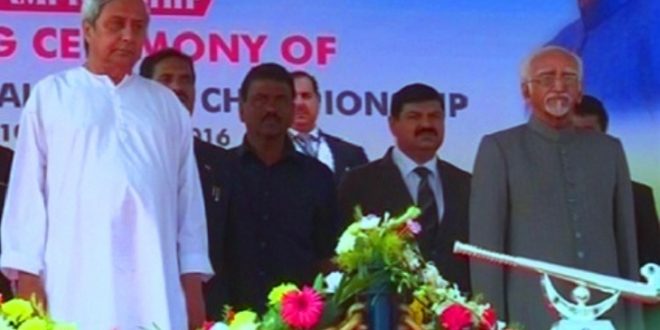 Rourkela: Vice President Hamid Ansari on Saturday inaugurated the Biju Patnaik Rural Hockey Tournament which will see over 1500 teams from Odisha, Jharkhand and Chhattisgarh competing for the title from December 16 to March 17.

Inaugurating the event, organized by former national team captain and tribal sporting icon Dilip Tirkey, at the SAIL Hockey Stadium, Ansari said the sport is the soul, air, and water in these regions.

The tournament is organized by the foundation of former hockey India captain and BJD MP Dilip Tirkey.

The tournament is going to be the biggest sports event in the state so far and likely to find a place in the Guinness Book of World Records. Around 1500 teams comprising 22,000 players from Odisha, Chhattisgarh and Jharkhand are expected to participate in the event.

Chief Minister Naveen Patnaik and Union Minister Jual Oram also attended the tournament that is aimed at encouraging rural youth towards the sport and inspiring youth living in bordering and Maoist-afflicted areas to pick up the hockey stick and instead of guns.

There will be 30 venues in the three states for the tournament. The finals will be played in March, said Tirkey.