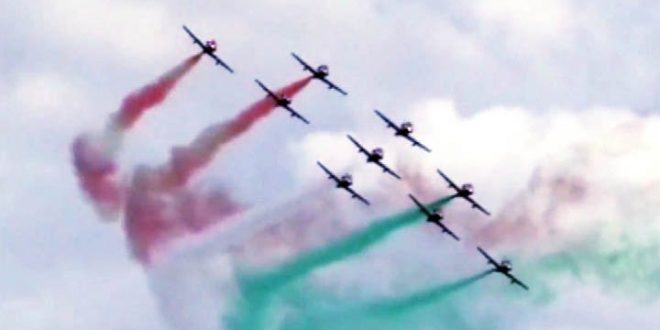 Cuttack: As part of the birth centenary celebrations of former Chief Minister Biju Patnaik, an air show was performed by the Indian Air Force (IAF) at Khannagar in Cuttack on Friday.

As many as 100 pilots, 10 IAF officials of Surya Kiran Aerobatics, Saranga Aerobatics and Akash Ganga Aerobatics teams of IAF participated in the daredevil show with 6 helicopters, 10 fighter aircraft, said sources. The air show was performed at Kathajodi river bed of Cuttack.

About three lakh people gathered to enjoy the daredevil show by the IAF. Schools and colleges in the city closed so that students can enjoy the air show.

The district administration made elaborate security arrangements to manage the traffic and avoid any incidences where birds collide with aircrafts during the show.

Cuttack Municipal Corporation directed to close all meat and fish shops within 5 kilometre radius of Khannagar.