According to sources, the Forest officials intercepted the trawlers near Satabhaya and arrested the fishermen for illegal activities.

As many as 10 trawlers, fish finder machines, fishing nets and other things were seized from their possessions, sources added.

Earlier on Sunday, more than 130 fishermen were arrested from the same prohibited area for fishing illegally.

Notably, a prohibition on sea fishing is in force round the year within the marine sanctuary limits. However, sea patrolling is stepped up within the Gahirmatha marine sanctuary from November to May every year in view of the annual mass nesting season of endangered Olive Ridley sea turtles. 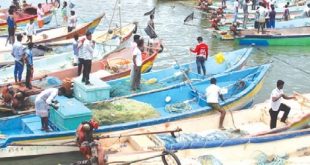