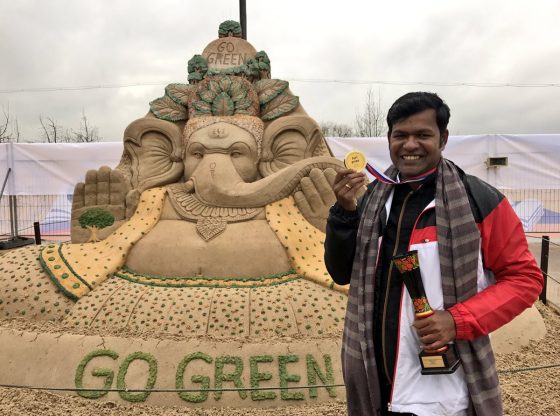 Pavel Menikov, the chief organizer of the event, awarded the prize to Pattnaik in a ceremony.

Twenty-five Sculptors from different countries around the world participated in this championship. Pattnaik was representing India. The theme of the competition was the “World around us”.

Sudarsan later called on the Indian Ambassador in Russia Pankaj Saran, who congratulated him on his winning the medal.

Pattnaik created a 10-ft high sand sculpture of Lord Ganesh with the message of “Go Green”.

“This year the slogan of Russian “Go Green”, so I chose this as the theme of my sculpture. We, on earth, are at the doorstep of an imminent ecological disaster- the global warming,” said Sudarsan.

Recently, he created world’s tallest sand castle at Puri beach, which was placed in Guinness Book of World Records.