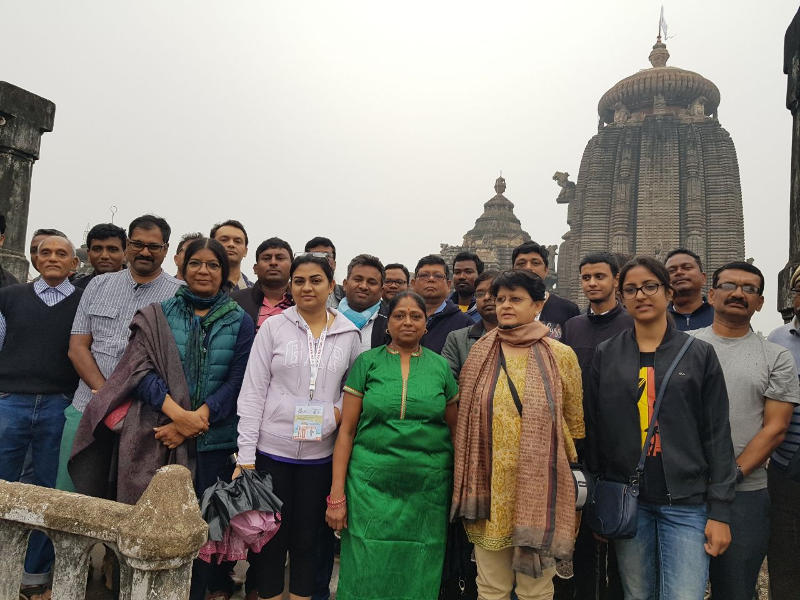 Bhubaneswar: More than 100 architects, part of the delegation of 34th National Convention of the Indian Institute of Architects (IIA), on Friday went on a special Ekamra Walks, heritage tour in the Old Town area and studied the unique Kalingan temple building architecture.

As professionals practising modern architecture, the delegates were surprised to see the precision and perfection of the Kalingan craftsmanship in building such marvellous structures with various types of stones. The delegation visited the heritage sites in two groups.

World over architects is the brain behind the structural aesthetics and appeal in any modern and old structures. The visit by so many architects to have a glimpse of our heritage structures in Old Bhubaneswar and the water bodies have added to their experience gathering.

Interestingly, being the Temple city of India, Bhubaneswar has also topped in the Smart City Challenge, becoming one of the chosen urban centres in India to have a child-friendly city plan.

Mukul Goyal, a well-known architect from Jaipur, Rajasthan, who went on the heritage trip today, said, “We were very happy in knowing the rich cultural tradition and especially the temple building style. In the Mukteswar Group of Temples, we were told that there people also learnt the temple building techniques in the past. The story of personal deities and how the concept changed to community worship and accordingly the designs of temples changed, made a wonderful piece of information given by our guide.’’

Goyal, who has widely travelled in the South East Asian destinations said, “There is a marked change in the appearance of the lions, but design wise, Kalingan influence over the temple-building and carving of the statues in the Balinese structures were very distinctly seen, here.’’

Two other architects Sandeep Jha and Lalichan Zacharias were also very happy to visit the ancient temples and knowing so much about the unique temple building tradition.

IIA National Council member and well-known city-based architect Akshay Beuria said, “We had a rich tradition of temple building, which, in fact, through our maritime trade links had also gone to faraway lands in the South East Asian nations. We thus wanted our IIA delegates to have the glimpse of the craftsmanship and for this, our heritage tour, Ekamra Walks, provided a nice platform.’’

The IIA national convention, also called `NATCON-2017’, started on December 7 with the participation of over 800 architects from across the nation and overseas. The convention has come to Odisha once again after 24 years.

Interestingly, the theme of the 34th NATCON has a theme `”Architectural Footprints Impact on Cities’’.

Under legislation model building bye-laws, affordable housing policy and Real Estate Regulatory (RERA) Act will be in focus during the national convention.