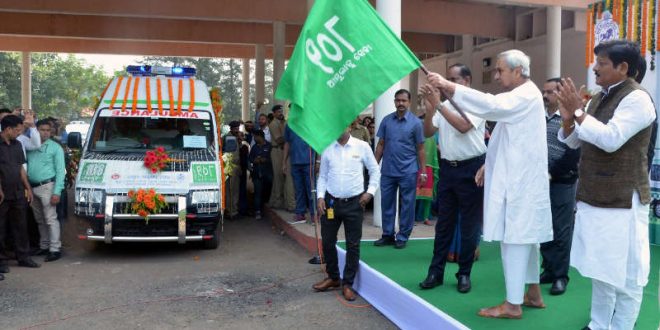 Bhubaneswar: In a bid to further improve the performance of Emergency Ambulance Service in Odisha, particularly in tribal districts, the state government on Saturday provided an additional 92 ambulances under the 108 fleet.

It has made a budget provision of 90 crores (over a period of five years) for these additional ambulances. These ambulances are dedicated to the people of Odisha, said Chief Minister Naveen Patnaik.

In the first phase, 24 ambulances have been launched by the Chief Minister. The remaining vehicles of the fleet of 92 ambulances will be rolled out phase wise, across the state.

All these ambulances will be operated in collaboration with Ziqitza Healthcare Ltd.

Commenting on the rollout of these ambulances, Naresh Jain, CEO, Ziqitza Healthcare Ltd, said, “We are happy to announce the addition of 24 more emergency ambulances in Odisha, which will help us to serve the people of Odisha more effectively by reducing the response time. We truly appreciate the efforts and support received from the Govt. of Odisha.”

Till date, over 31 lakh people of the state have benefited from the ambulance service. The intervention has been instrumental in significant reductions in both the Infant Mortality Rate (IMR) and the Maternal Mortality Ratio (MMR) in the state.

Introduction of this new fleet of ambulances is part of the agreement signed between Ziqitza Health Care Ltd. (ZHL) & Department of Health & Family Welfare, Government of Odisha on 6th May 2017 for the launch of 92 additional 108 ambulances in the state.

In the first phase, the Odisha government is going to launch these new 24 ambulances in districts like Anugul(4), Puri (3), Bergad (3), Dhenkanal (3), Balasore (4), Bhadrak (3), Sundargad (4). All the new ambulances have an extra inner space than the previous models, which will make it more comfortable for the patient.