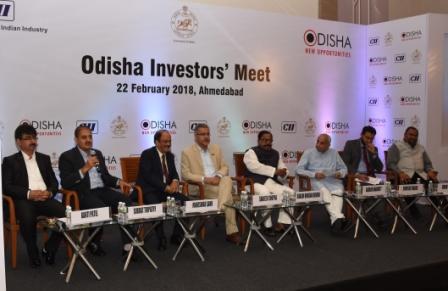 Bhubaneswar: The Odisha government on Thursday invited Gujarat-based industrialists to participate in Make in Odisha Conclave 2018, the flagship biennial investors’ summit of Odisha, scheduled to be organized in Bhubaneswar from November 11-15 this year.

The government appealed the investors while organizing an investment promotion roadshow in Ahmadabad to showcase the inherent advantages of investing in Odisha.

The state also plans to reach out to potential investors with roadshows in Germany, US, China, Japan and South Korea, as well as several Indian cities including Delhi, Bangalore, Chennai, Vizag and Coimbatore, ahead of the biennial ‘Make in Odisha’ conclave.

“With the objective of attracting 2.5 lakh crore of fresh investments and generating 30 lakh job opportunities as part of Vision – 2025, the state government is working tirelessly towards diversifying and broadening the state’s industrial development across the focus sectors. We invite Gujarati industrialists and entrepreneurs to explore growth opportunities in Odisha and invest in the state,” said Behera.

“Over the last 3 years, the state government has embarked upon the implementation of a Business Reforms Program to make it easier for companies to set up and operate in the state following which Odisha has been recognized as a ‘Leader’ in terms of implementation of business reforms with 92.73% score in the Ease of Doing Business Report of 2016,” said Chopra.

The state government is also giving early bird discount to investors on the land cost to set up units in the state of the art Angul Aluminium Park, he added.

Odisha has registered a GSDP growth rate of 7.94 percent in 2016-17, surpassing the national growth rate of 7.1 percent. The state government has set a target of generating employment for 30 lakh citizens by attracting investments worth Rs. 2.5 lakh crore in focus sectors.

Notably, of the 124 investment intents received during the investors’ meets organized last year at Mumbai, Bengaluru and in the Make in Odisha Conclave 2016, the state government received and approved firm proposals for 76 projects worth Rs. 2.02 lakh crore.