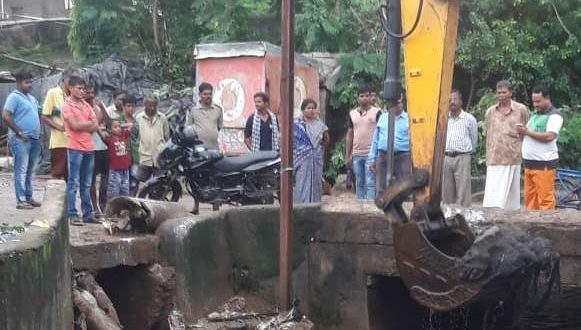 Bhubaneswar: After round the clock action for two days, successfully managing the natural calamity of torrential heavy rains caused by low pressure on the Bay of Bengal, Team BMC on Monday fanned out across the city, extensively working on cleaning of roads, drains and removing obstructions at several places.

All the 13 nodal officers with their respective teams including 40 engineers, entire sanitation workforce of the civic body comprising over 1050 baseline workers started the work from early morning covering the entire city through the day.

Leading from the front Mayor Ananta Narayan Jena visited vulnerable areas including Salia Sahi under Ward 26, overlooking the cleaning and garbage lifting work done by the officials along Drain No. 4. Clogged stormwater garbage from the drain near Dasarathi Apartment was cleared with help of excavators deployed by BMC.

Advising people to not dump garbage, plastic and construction waste into the drains, Mayor directed officials to remove all encroachments on the drains while asserting that illegal construction by some people on the drainage channel going towards Gangua causing constriction of drains which ultimately makes all the citizens suffer during heavy rains.

All those constructions will be demolished who have constructed beyond the revenue measurement, he added.

Another team led by Commissioner, BMC along with officials of BMC and BDA visited several low lying areas of the city and action has been initiated to remove encroachments and obstructions along the drains as well as natural drainage channels.

Cooked food has been provided in Ward 11 and Satya Kali Behera Sahi basti, adjacent to Satya Nagar Crematorium. Meanwhile, 15 complaints related to stormwater drainage issues received from citizens on the Bhubaneswar One Helpline number as well as the dedicated stormwater helpline of BMC were resolved expeditiously.