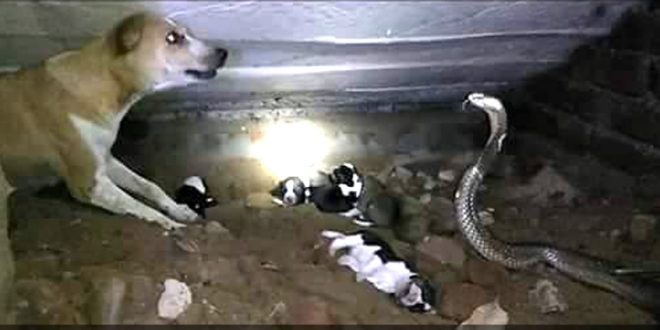 Dog fights poisonous snake to save puppies in Odisha

Bhadrak: We all know how a mother protects her children by risking her life. A befitting example was seen in Odisha’s Bhadrak district where a dog went into a fierce fight with a poisonous snake to save her puppies.

The incident occurred at Satabhauni bazaar on the outskirts of Bhadrak on Monday night.

The dog and its seven puppies had taken shelter under the staircase of lecturer Bijay Parida’s house. When the snake slithered in and bit two of the puppies, leaving them dead, the mother dog pounced upon the poisonous snake.

On hearing the fierce hissing and barking, local people gathered at the spot and watched the ferocious fight between the reptile and the canine.

In the battle, the dog lost its two puppies while it succeeded in saving the lives of the other five. Locals called snake rescuer Mirza Arif who took the reptile away.