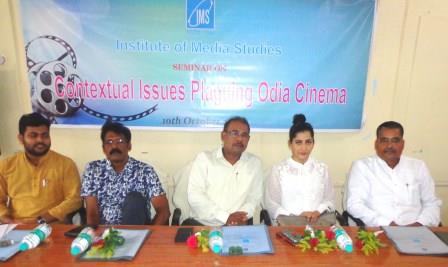 “Odia cinema industry lacks qualitative content oriented original cinema. The cinema is the reflection and it represents the culture and the life of any region, through the cinema we are communicating our culture and vision to the world.  The Odia film can be as successful industry as any other language film if it is provided with the content-driven subjects,” said Anu Chaudhury.
She said, “the Odia film industry has got immense potential. If it’s been creatively conceptualised, then only we will be able to create original cinema.”

She was speaking at a seminar on ‘Contextual Issues Plaguing Odia Cinema’ organised by city-based Institute of Media Studies (IMS) here.

The Odia cinema has a glorious past. The first Odia film ‘Sita Bibaha’ was released in the year 1936 and was an important part of the struggle for a manifestation of Odia cultural identity in celluloid form and it is a movable history, said cine critic and researcher Surya Deo.

Deo said since the first film in Odia language “Sita Bibaha”, the industry has gone stronger by every passing day.

“But for last two decades or more the standards of Odia Cinema has gone down drastically. There was a time when Odia films were hailed by film lovers across the country and these movies used to get laurels from International film circuits. But in recent years, even Odia people hesitate to watch films made in this regional language,” he added.

Among others, Director of the institute Prof Upendra Padhi and course coordinator of MJMC department Manoranjan Panda also spoke.