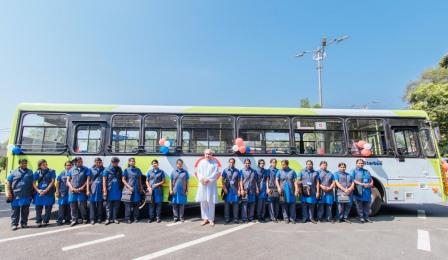 Lady conductors to lead the safety bandwagon in Mo Bus

Bhubaneswar: If the safety has become a synonym for the “Mo Bus”, which opened its innings today following the flagging off ceremony at Biju Patnaik Square near the international airport, the visible presence of lady conductors onboard was the talk of the town.

A top official of Capital Region Urban Transport (CRUT) said that today there were around 30 lady conductors on board out of the nearly 200 recruited so far.

The ratio will be more rational making the presence of the women folk to around 50 per cent of the total conductors’ postings in the days to come, he added.

The bus, which took media persons on a first-day-first-ride experience, had many women/lady conductors.

Rajani Bala Das, who was earlier working with the Dream Team Sahara, said “The safety and security aspect would be the top selling point in the success of Mo Bus. As there will be more and more women conductors, the ladies travelling in the buses will feel more and safer and secure.’’

Rajani belongs to Khandagiri area of the city.

Similarly, Sugyani Baral, a new lady conductor from Nakhara on the city outskirts said, “With GPRS tracking, the buses will automatically feed the public information system and the public announcement will run as the bus moves ahead. Girls and working women will feel safer and secured and hence would be happy to use public transport, more often.”

Lady conductor Renubala Pradhan said, “The closed-circuit cameras will ensure a safe environment in public transport and the young and the old will definitely use the service. I hope this will revolutionise the public transport scenario in the State Capital.”

“The new city bus service `Mo Bus’ will be popular with its safety assurance as inside there will be CCTV surveillance and the women conductors would also add to that as the girls or women passengers would be happy to see the women conductors amongst the crew,” said lady conductor Gayatri Maharana.

“Employing lady conductors by the CRUT authorities definitely proves the commitment of the State Government to its attitude towards women empowerment. After this, more and more women will be inspired to take jobs, which were earlier remained under the male bastion. I am happy that I was chosen to become a lady conductor in CRUT,” Itishree added.

It can be noted here that 50 per cent of conductors, who will be called “Bus Guides” would be deployed to make the public transport more efficient and friendly towards women passengers. After his ride, the Chief Minister also interacted with the lady conductors and a group.

Under the Mo Bus fleet, there will be 300 buses in three phases. While the Phase-I Network rolled out today with 100 buses, the Phase-II Network will be launched on November 15 and the Phase-III will be unveiled on December 10. All the three networks will have different route maps. The route map of the Phase-I has already been out.