Many feared dead as bus falls off Mahanadi bridge in Cuttack

Cuttack: At least 10 persons were killed and several injured after a passenger bus fell off Mahanadi bridge in Odisha’s Cuttack on Tuesday.

The deceased include nine male and three female passengers. The injured persons have been admitted to the SCM Medical College and Hospital.

Earlier, DGP Rajendra Prasad Sharma confirmed the death of seven persons due to the accident.

“I am extremely saddened to know about seven deaths…RIP…most of the other injured have been shifted to the hospital and are receiving treatment….wish them a speedy recovery,” tweeted Sharma.

Jagannath, the ill-fated bus was on the way to Cuttack from Talcher in Angul district this evening when the accident took place.

Sources said the bus driver lost control after it hit a bullock on the bridge and fell over 30 feet off the bridge. 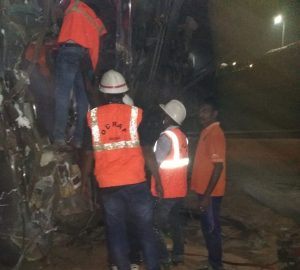 Odisha Disaster Rapid Action Force (ODRAF) team, police personnel and fire personnel have been engaged in rescue operations and shifting the injured passengers to the hospital.

Chief Minister Naveen Patnaik expressed deep concern on the falling down of a passenger bus from the Mahanadi bridge injuring several people.

He also announced ex-gratia of Rs 2 lakh each for the next of the kin of the deceased and free treatment for those injured.

The Chief Minister directed Sports and Youth Affairs Minister Chandra Sarathi Behera to rush to the spot and to ensure the treatment of the injured.