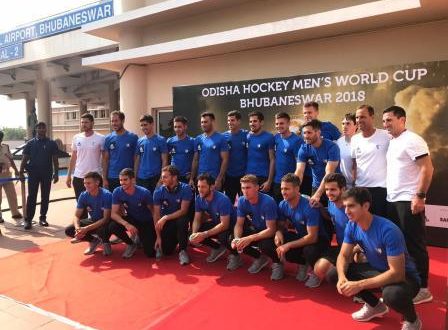 Bhubaneswar: Olympic Champions and World No.2 Argentina arrived in Bhubaneswar for the Odisha Hockey Men’s World Cup 2018 scheduled to be held at Kalinga Stadium from November 28.

The anticipation among local hockey buffs and early morning travellers was evident as they waited patiently to catch a glimpse of their favourite stars and welcomed the team to roaring cheers as they walked out of Terminal 2 at the Biju Patnaik International Airport here on Wednesday.

Expressing his team’s excitement to return to Bhubaneswar where they won the Silver Medal at the Odisha Men’s Hockey World League Final 2018, Argentina’s dragflick sensation Gonzalo Peillat said, “It will be a great tournament, playing in Bhubaneswar again in front of a crazy crowd, the entire team is looking forward to it and are very excited to be back.”

Argentina grouped in Pool A with Spain, New Zealand and France will begin their campaign on 29 November in the first match of the day at 17.00 hours IST at the newly renovated Kalinga Stadium.

The Olympic Champions have a new Chief Coach in Germán Mariano Orozco who replaced former Chief Coach Carlos Retegui in early 2018 and is a former defender for Argentina having played the Olympic Games in 2000 and 2004.

“I think experience in the team is very good. We have played quite a few tournaments in the lead up to the Odisha Hockey Men’s World Cup Bhubaneswar 2018 under a new coach Germán Mariano Orozco and we have been performing well under him,” said a confident Peillat.

Argentina in the previous World Cup in 2014 at Hague had finished third behind winners Australia and runners-up the Netherlands and went on to win the Olympic Games Gold Medal in 2016.

“I don’t think being World No.2 or the Olympic Champions would matter here in this tournament as every other team would have come with the intention to win. We have to focus on every game and play our best hockey,” Peillat added further stating that penalty corners will be their strong point.

“Everybody knows penalty corners will be our strong point and it’s important to give our 100 per cent in all aspects,” he said.