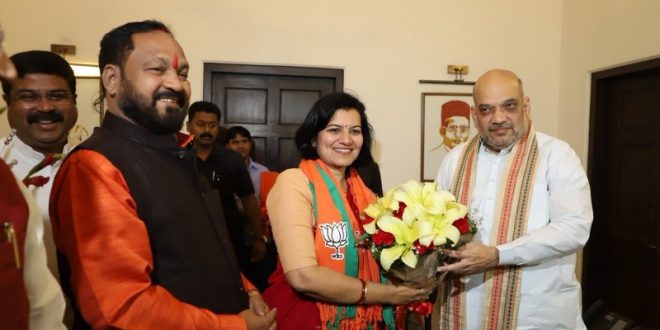 Many senior leaders including Union Minister Dharmendra Pradhan, Odisha BJP president Basant Panda and State in-charge Arun Singh were also present during the programme held at the residence of Shah.

“The party’s motto and leader made me choose BJP which not only assures development but ensures speed in development,” said Sarangi.

“I have a strong value system and love to take challenges and being in BJP will give me an opportunity to pursue both,” she added.

Dharmendra Pradhan said her experience in administration especially in improving school and mass education in Odisha will greatly strengthen BJP.

Smt. @AprajitaSarangi,Ex IAS from #Odisha cadre joined @BJP4India today in the presence of National President Shri @AmitShah.
I welcome her to the BJP family. Her experience in administration esp. in improving school & mass education in Odisha will greatly strengthen @BJP4Odisha. pic.twitter.com/3TPASH0slO

1994-batch IAS officer Sarangi, who was serving as the Joint Secretary of MGNREGA under Ministry of Rural Development, had applied for voluntary retirement from service on September 15.