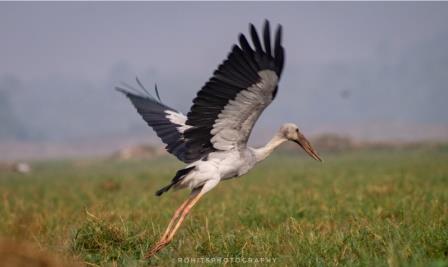 Mangalajodi, a fishermen’s village resting on the fringes of the northern part of the Chilika lagoon, is emerging as an excellent habitat for migratory and resident birds in Odisha.

The bird’s paradise hosts more than 3 lakh birds in its marshy waters, especially in winters. It is one of its kind ecosystems, whose protection is epitomised by a sustainable lifestyle.

I have been yearning for years to visit Magalajodi and listen to its stories from the people. A genuine thanks to Subha Sudarshan Nayak, Saswat Dalai and Samiksha Nayak that made this trip possible.

We started from Bhubaneswar at 6:00 AM. It was a 2hr 45 minutes drive. There weren’t much human activities that time around. We reserved a boat for three hours. It cost us 1200, 4 Passengers, A Guide, and a Boat Man. They provided us with binoculars and a bird guide book as we all stepped on the boat. Our journey, through this wetland – the largest brackish water lagoon in Asia – was enchanting.

Once when the villagers were poachers, the number of birds were very less. And now the villagers realized the value of the birds and they became the conservationists. During day time they work as birding guides, boatmen and hospitality staff.

They realized that protecting the bird is their primary source of livelihood. Now they treat the birds who come from the far corners of the world, gradually birds also have noticed the transformation.

To a birder, Mangalajodi is a heaven for photography. A magnificent place to visit and spend some time in the wetland. There are so many migrant and local birds in just one place that for a birder it’s worth a visit. One will get all the birds at eye level sitting on a hand paddled canoe.

Nearest railway station of Mangalajodi is Balugaon. Many trains from Howrah station of Kolkata stop here. From Balugaon it is 30 Km. journey to Mangalajodi. One can also take a flight to Bhubaneswar, Mangalajodi is only 2 hours drive. The best time to visit is November to February to see migratory birds.

The black-winged stilt (Himantopus himantopus) is a widely distributed very long-legged wader in the avocet and stilt family (Recurvirostridae). The scientific name H. himantopus was formerly applied to a single, almost cosmopolitan species.

It is now normally applied to the form that is widespread in Eurasia and Africa and which was formerly regarded as the nominate subspecies of Himantopus himantopus sensu lato. The scientific name Himantopus comes from the Greek meaning “strap foot” or “thong foot”.

The Red-wattled lapwing (Vanellus indicus) is an Asian lapwing or large plover, a wader in the family Charadriidae. Like other lapwings they are ground birds that are incapable of perching.

Their characteristic loud alarm calls are indicators of human or animal movements and the sounds have been variously rendered as did he do it or pity to do it. Leading to the colloquial name of did-he-do-it bird.

The black-tailed godwit (Limosa limosa) is a large, long-legged, long-billed shorebird first described by Carl Linnaeus in 1758. It is a member of the godwit genus, Limosa. There are three subspecies, all with orange head, neck and chest in breeding plumage and dull grey-brown winter coloration, and distinctive black and white wingbar at all times.

The garganey (Spatula querquedula) is a small dabbling duck. It breeds in much of Europe and western Asia, but is strictly migratory, with the entire population moving to southern Africa, India (in particular Santragachi), Bangladesh (in the natural reservoirs of Sylhet district) and Australasia in winter, where large flocks can occur.

This species was first described by Linnaeus in 1758. Like other small ducks such as the common teal, this species rises easily from the water with a fast twisting wader-like flight.

The Asian openbill or Asian openbill stork (Anastomus oscitans) is a large wading bird in the stork family Ciconiidae. This distinctive stork is found mainly in the Indian subcontinent and Southeast Asia. It is greyish or white with glossy black wings and tail and the adults have a gap between the arched upper mandible and recurved lower mandible.

Young birds are born without this gap which is thought to be an adaptation that aids in the handling of snails, their main prey. Although resident within their range, they make long distance movements in response to weather and food availability.

The black-headed ibis (Threskiornis melanocephalus), also known as the Oriental white ibis, Indian white ibis, and black-necked ibis, is a species of wading bird of the ibis family Threskiornithidae which breeds in the South- and Southeast Asia from India to the west and as far east as Japan.

It is the only native ibis species in its range that has an overall white plumage with a black neck and head. The down-curved beak and legs are also black. Though often referred to as a wetland species, the black-headed ibis forages in a range of natural and man-made habitats. This species of ibis nests only during the rainy season (or monsoon).

The glossy ibis (Plegadis falcinellus) is a wading bird in the ibis family Threskiornithidae. The scientific name derives from Ancient Greek plegados and Latin, falcis, both meaning “sickle” and referring to the distinctive shape of the bill.

The common greenshank (Tringa nebularia) is a wader in the large family Scolopacidae, the typical waders. The genus name Tringa is the New Latin name given to the green sandpiper by Aldrovandus in 1599 based on Ancient Greek trungas, a thrush-sized, white-rumped, tail-bobbing wading bird mentioned by Aristotle.

The specific nebularia is from Latin nebula “mist”. Like the Norwegian Skoddefoll, this refers to the greenshank’s damp marshy habitat.

The common sandpiper (Actitis hypoleucos) is a small Palearctic wader. This bird and its American sister species, the spotted sandpiper (A. macularia), make up the genus Actitis.

They are parapatric and replace each other geographically; stray birds of either species may settle down with breeders of the other and hybridize. Hybridization has also been reported between the common sandpiper and the green

The pintail or northern pintail (Anas acuta) is a duck with wide geographic distribution that breeds in the northern areas of Europe, Asia and North America.

It is migratory and winters south of its breeding range to the equator. Unusually for a bird with such a large range, it has no geographical subspecies if the possibly conspecific duck Eaton’s pintail is considered to be a separate species.

The pied kingfisher (Ceryle rudis) is a species of water kingfisher widely distributed across Africa and Asia. Originally described by Linnaeus in 1758, it has five recognised subspecies. Its black and white plumage and crest, as well as its habit of hovering over clear lakes and rivers before diving for fish, make it distinctive.

Males have a double band across the breast, while females have a single gorget that is often broken in the middle. They are usually found in pairs or small family groups. When perched, they often bob their head and flick up their tail.

Besides these birds, there are several other birds are found at Mangalajodi bird sanctuary.