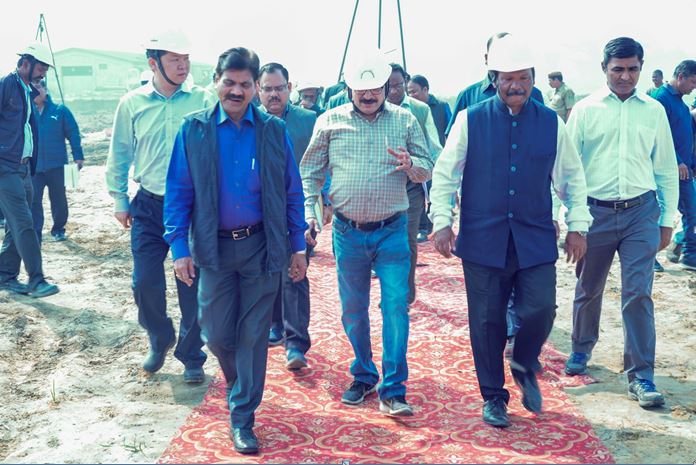 He said the Coal Gasification based Urea Plant of Talcher Fertilizers Ltd is the first of its kind project in the country.

The project will have an output of 1.27 Million Metric Tonnes Per Annum (MMTPA) of ‘Neem’ coated urea using a blend of indigenious coal and petcoke as feedstock.

The plant is scheduled to be commissioned by 2023. Talcher plant shall ensure easy availability of urea in Odisha and adjoining States.

He informed that the plant will have an annual production of 12 lakh metric tonnes (LMT) of fertilizers.

This will include a daily production of 2,200 tonnes of ammonia and 3850 tonnes of urea. Besides, the plant will produce an additional 100 metric tonnes of sulphur.

The plant shall promote alternative use of abundantly available domestic coal in an environment friendly manner.

The coal gasification based Ammonia Urea Complex being set up at Talcher will have a design capacity of 2,200 Tonnes Per Day (TPD) of ammonia and 3,850 TPD of urea.

The gasification process to be adopted at Talcher unit will emit negligible amount of sulphur oxides, nitrogen oxides and free particle emissions as compared to directly coal fired processes.

Carbon dioxide, a greenhouse gas which is emitted from coal, would be partially captured in closed loop process and recycled for production of urea.

The project is expected to significantly improve the quality of life and socio-economic status of the people in the area as it will generate opportunities in the form of direct and indirect employment in the region.

Up to 10,000 people are expected to be employed during the construction period and over 4,000 direct/indirect employment opportunities once the plant comes under operation.

The pre-project activities of TFL are underway with full swing at site. Jobs like site grading, construction power & water are near completion and another major job related to construction of roads, culverts, drains etc. is underway.

This project is one of the most prestigious projects of GoI and along with other fertilizers project of HURL at Sindri, Barauni, Gorakhpur and Ramagundam Fertilizer Project will nearly obviate the need for import of urea in the country.