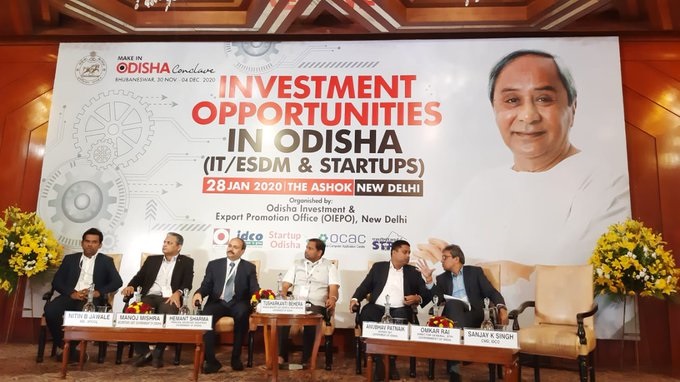 Bhubaneswar: In order to strengthen its position in the IT&ESDM sector, Odisha government organized an investment meet in New Delhi highlighting investment opportunities in the Industries, Electronics and IT (E&IT) and StartUp sectors.

The event was attended by representatives from the IT and Electronics industry based in the National Capital Region.

The investment meet is part of Odisha Government’s initiative to connect with potential investors in the lead up to the third edition of the biennial investment conclave ‘Make in Odisha’ (MIO) scheduled from November 30 to December 4 this year.

A string of reforms to ease and facilitate industrial infrastructure and commitment to cut down carbon footprint through the distribution of LED bulbs helped Odisha climb up the rankings of Niti Aayog’s Index.

The states were appraised on the basis of efforts made to achieving the mandated Sustainable Development Goals (SDGs) by 2030.

According to a recent Niti Aayog report, Odisha is the second fastest mover state with a score of 58. 2019 witnessed Odisha gaining nine points as its score moved up from 51 in 2018.

Hemant Sharma, Secretary (Industries & MSME) said, “Odisha is known to be one of the first state to get the top four IT companies to set up centers on its turf. Our next phase is to ramp-up information technology (IT) and ITes (IT enabled services). In its geographic location, Odisha has many inherent advantages. We have an abundance of rivers and some well-developed ports”.

Speaking at the roadshow, Dr Nitin Jawale, Managing Director, IPICOL said, “Odisha has progressed industrially and we are at a very good position now. We are expecting further investments in 2020. Recognizing the importance of ESDM the government has announced a special incentive package scheme for the sector comprising of subsidy on fixed capital investment for plant & machinery, exemption from Entry Tax on acquisition of machinery and equipment, Training subsidy, etc. We are very hopeful that we will be able to establish ourselves as the premier industrialized state in the country.”

Manoj Mishra, Secretary, E&IT department, said: “Odisha is en route to emerging as one of the most favored destinations for IT and electronics investments. The government has recast its existing Information & Communications Technology (ICT) policy. In the reformulated policy, the government is offering reimbursement of the Goods & Services Tax (GST), both to new and existing units.

Post the policy amendment, new units in IT, ITes and ESDM verticals can avail reimbursement on State GST for five years from the date of commercial operations. Existing units can also avail the benefit if they opt for expansion, modernization and expansion, but it would only apply to enhanced production over and above the current rated capacity and limited to 100 per cent of the additional cost of plant and machinery.”

“Efforts are also underway to develop air cargo facilities to fulfill industry requirements.  In addition, the state government has developed an electronics manufacturing cluster (EMC) straddling 207 acres at Bhubaneswar’s periphery. The cluster provides plug and play work ambiance where investors can walk in and start businesses without ado,” added Mishra.

Odisha is one of the leading states when it comes to “Ease of doing business” and recently edged past Maharashtra as the most attractive destination for investments during H1 or the April-September period of FY20.

The road show focused on how the state is growing and attracting investments in the IT and Electronics sector.

India is one of the major contributors to the international IT services market. The IT industry is expected to grow by 15% in the future and India will be a major software exporter.

The state has an exclusive ICT policy providing incentives and creating a sound ecosystem to the startup movement. The IPR 2015 identifies IT/ITES and ESDM as focus sectors.

Odisha is one of the early movers in recognizing the potential of IT &ITeS sector and facilitated the setting up of the Infosys training center in 1998. The presence of all four leading IT companies – TCS, Infosys, Wipro and Tech Mahindra in Bhubaneswar speaks volumes for the congenial and proactive industrial climate for IT in the state.