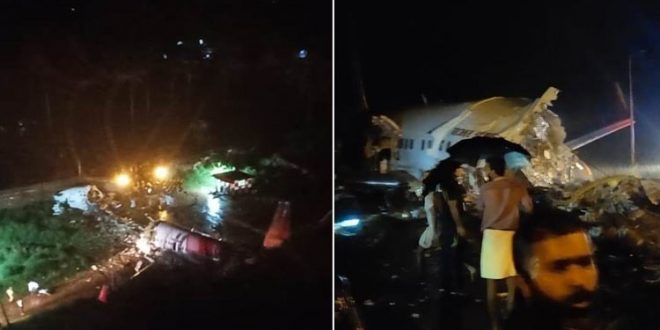 Air India Express plane with 191 on board crashes in Kerala


Kozhikode: Several persons were injured, some of them seriously, when an Air India Express flight with 191 passengers on board en route from Dubai skidded off the runway while landing at Kerala’s Kozhikode on Friday evening.

Air India Express flight IX 1344 operated by B737 aircraft from Dubai to Calicut skidded off the runway and fell down a valley at the Calicut international airport Friday evening at around 1941 hrs.

Images from the site showed the aircraft completely broken up. The cockpit separated from rest of the aircraft’s body following the mishap.

Kerala Chief Minister Pinarayi Vijayan said the police and fire personnel have been instructed to take urgent action in the wake of the plane crash at the Kozhikode International airport (CCJ) in Karipur.

“Have instructed Police and Fire Force to take urgent action in the wake of the plane crash at the Kozhikode International airport (CCJ) in Karipur. Have also directed the officials to make necessary arrangements for rescue and medical support,” tweeted the CM.

In a tweet, Union Home Minister Amit Shah said, “Distressed to learn about the tragic accident of Air India Express aircraft in Kozhikode, Kerala. Have instructed NDRF to reach the site at the earliest and assist with the rescue operations.”

Minister of External Affairs Dr. S. Jaishankar tweeted, “Deeply distressed to hear about the Air India Express tragedy at Kozhikode. Prayers are with the bereaved families and those injured. We are ascertaining further details.”