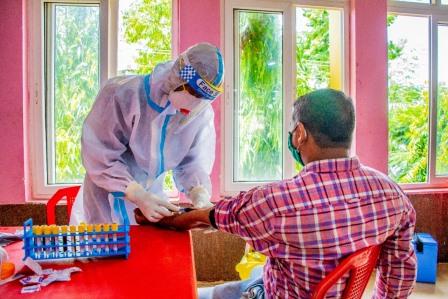 
Bhubaneswar: Tests for COVID-19 in Bhubaneswar has crossed 1 lakh mark, said an official on Friday.

The city has so far conducted 1, 04,390 tests both by the government and private facilities.

Out of this, while the Real Time Polymerase Chain Reaction (RT-PCR) tests count for 52,205, the Rapid Antigen Tests count for 21,445 and TrueNAT tests are 353 in numbers.

On the other hand, antibody tests were done on 5,042 persons to look for the presence of antibodies, which are specific proteins made in response to infections.

Also termed as Serological Test, antibodies are detected in the blood of people who are tested after infection as they show an immune response to the infection.

Of all these tests, while 79,042 tests are done at Government facilities, 25,348 tests were conducted at private centres across the city within this time period.

The rapid rise in COVID-19 tests among people has become possible with opening of the Rapid Antigen Test centres at 16 health-care centres across the city.

In this process under the collaborative effort of the Health and Family Welfare Department and Bhubaneswar Municipal Corporation (BMC), 12 Urban Primary Health Centres (UPHCs) and four Urban Community Health Centres (UCHCs) are roped in to do the testing. The testing is available from 8 am to 2 pm at these centres.

The mobile testing van has also contributed in taking the testing figures to this level as it is jointly managed by Capital Hospital Bhubaneswar and BMC.

Capital Hospital has contributed the most as there are 14 teams working to facilitate it.

While 10 mobile teams of the largest Government hospital of the city are going to different places across Bhubaneswar city to conduct tests, three teams remain there to manage the in-house requirements and one team goes with the mobile testing van, which started on August 2.

It would be pertinent to mention here that BMC has made special arrangements to organize tests for differently-abled, markets, journalists, police and resident welfare associations to cover majority of the population or those having any symptoms or any suspected proximity with COVID-19 positive cases.

As more and more cases are reported following a rapid rise in tests, four more experts are inducted into the rapid response team for contact tracing, especially at the COVID Control Room at BMC, which is jointly run by BMC, Bhubaneswar Development Authority and Bhubaneswar Smart City Limited.

As an interesting development, Odisha has emerged second among states in the country by conducting 1,265 tests per million per day, compared to the national average of 580.

Only Goa is doing more tests than Odisha, the Ministry of Health tweeted on Friday with a statistical bar-chart of states and Union Territories performing more than 140 COVID tests per day per million population.