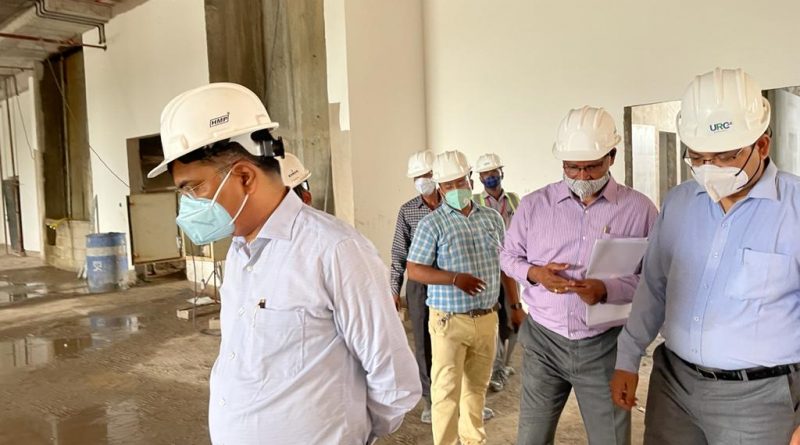 The Smart City CEO-cum-BMC Commissioner also discussed about arrangement of floors to the office buildings of BMC and ICOMC (Intelligent City Operations and Management Centre) and emphasized to expedite the work progress so that it would be completed by the end of this year. Senior officials of BSCL accompanied him during the visit.

The building, which will become an iconic structure of the city and would house 12 floors would also accommodate five floors for commercial office space so that the entire structure would run on a sustainable model.

As per Smart City sources, while the lower ground floor and upper ground floor will be allocated to BMC and first floor and second floor to ICOMC, again the third and fourth floors will also go to BMC’s kitty.

The fifth floor will be allocated to Smart City office and the upper five floors after the BSCL office would be given on rent to have a permanent income source to run the building. There would be adequate parking and other essential facilities also.

It can be mentioned here that while the BMC office will be housed in four floors, the important ICOMC facility in two floors will be an integrated centre to have digital control over all the city operations including the monitoring of emergency, police and other vehicles and buses engaged for public transport.

Systems like incident management with public address system, traffic and speed management for vehicles and number plate recognition through the digital cameras installed across various locations of the city, the ICOMC in this upcoming building will be a state-of-the-art facility to use high-end technology for citizens of the historic city.

The Rs 73 crore BMC-ICOMC Building of 2,31,000 square feet is under progress on a land of 4.04 acres. For this iconic structure the General Administration Department of Odisha Government on May 30, 2018 had given permission to demolish four 4R quarters and eight 3R quarters. After that on August 8 in the same year the demolition process started for the construction of the building.

Apart from the 12 quarters, there was also a firewood godown of Odisha Forest Development Corporation (OFDC), which was supplying wood for people coming to use the Satya Nagar crematorium. BMC was asked by the State Government to accommodate the OFDC facility inside the crematorium ground so that people would be benefitted.