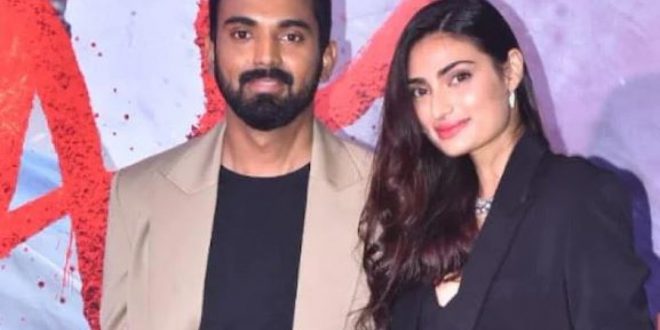 
Actress Athiya Shetty and cricketer KL Rahul have made their first appearance as a couple at the screening of the actress’ brother Ahan Shetty’s upcoming movie, Tadap.

Athiya and Rahul stopped to pose for the camera before going for screening of the movie.

Rahul looked dapper in a beige suit paired with a black T-shirt while the actress chose for an all-black look. Both stood closely as they posed for the shutterbugs.

Ahan arrived with his girlfriend Tania Shroff for the screening.

In November, actress Athiya Shetty and star cricketer KL Rahul made their relationship official with a loved up post.

Tadap is the biggest release of this week. KL Rahul who is dating actress Athiya Shetty came to show support for his beloved’s brother’s new innings.

Suniel Shetty said that they look ‘brilliant together’ and also thanked him for a great birthday gift when he scored a 100 at Lord’s in August 2021.