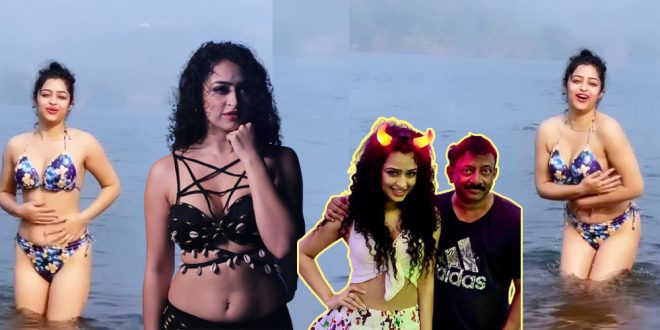 Apsara shares a bathing video: RGV asks where is forest?


Apsara Rani aka Anketa Maharana from Odisha has created her identity in the entertainment industry. She debuted in Bollywood with her movie Thriller directed by Ram Gopal Verma (RGV).

While introducing Apsara Rani, the director had landed himself in controversy for his tweet. However, it seems Apsara Rani and Ram Gopal Verma share a good bonding as the duo often found commenting and appreciating each other on the social media platform.

Recently, a video of the actress has grabbed the attention of the netizens. On Tuesday, Apsara Rani shared a hot bathing video on her social media handles. “Forest Bathing,” she said in the caption.

As soon as she dropped the video, it went viral. In the video, Apsara can be seen wearing floral blue biniki and taking bath in a river.

“Woweeeeeee! U are looking HOTTER THAN THE SUN ..But where’s the forest ?” Ram Gopal Verma commented on the video.

Apsara also replied to RGV and said, “Forest Bathing is a term used when you’re lost in the.Thank you for the compliment.” To this Verma replied, “Oh really ..I thought the nature is lost in u.”