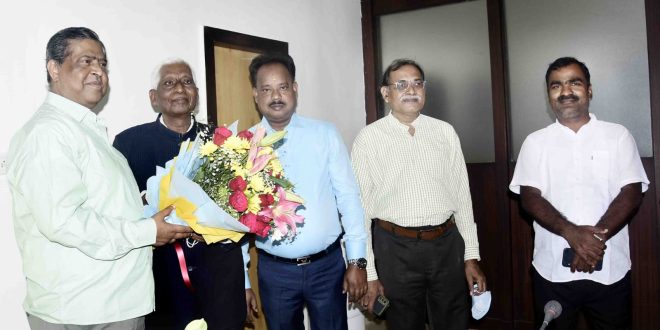 Having completed his B.Sc. (Agriculture) from OUAT in 1971, Prof. (Dr.) Ray did his M.Sc (Ag) from Calcutta University and secured his Ph.D from the same university in 1981.

After serving as Assistant Professor, Horticulture, in Calcutta University and then as Associate Professor at OUAT, he handled several responsibilities including Associate Director (Research), Professor and Head of Department, Horticulture, Dean of Extension Education and Registrar in the same university. He was appointed as Vice-Chancellor of OUAT in 2006 and continued in office till 2012.

Having guided more than fifty post-graduate and Ph.D students, he had more than 200 scientific papers published in journals of national and international repute and those of high impact value.

Prof. (Dr.) Ray served as chairman of several national committees of the Indian Council of Agricultural Research (ICAR), Department of Biotechnology (DBT), Department of Science and Technology (DST) and the Planning Commission of Government of India.

A fellow of National Academy of Agricultural Science, Horticulture Society of India, New Delhi, National Academy of Biological Sciences, Chennai, Indian Society of Vegetable Science, Varanasi, Confederation of Horticulture Association of India, New Delhi and Odisha Environment Society, Bhubaneswar, he was honoured with the Dr. M.H. Marigowda National Award in 2009, Think Odisha Leadership Award as Vice-Chancellor of state universities in 2010, Life Time Achievement in Vegetable Crops Award in 2011, Life Time Contribution for Promotion of Agriculture Science in 2011, Senior Scientist Award in 2016, Odisha Bigyan Academy Award and Recognition Award for Committed Contribution in the field of Vegetable Research and Education in 2019.