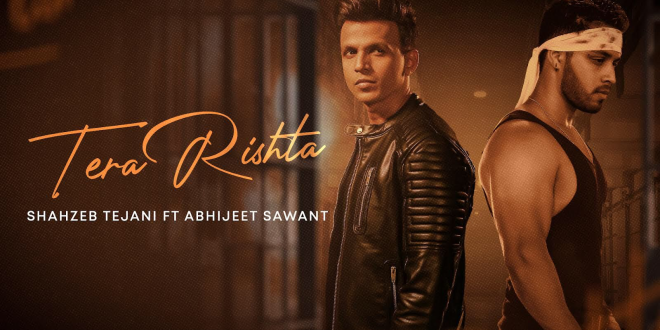 
To have the vision to attain a particular goal is one thing, but to choose to grind each day, face challenges head-on, choose to do the different, and learn every day to turn those visions into reality is a different thing altogether.

To belong to the latter category, people need to committedly work towards their goals and surrender themselves to their dreams to reach their highest peaks of success in their respective careers and endeavours in life.

Serving as one of the finest examples of one such incredible Rockstar and a rising name in the world of Indian music is Shahzeb Tejani, who now has made more headlines and turned more heads with his recent collaboration with the 1st Indian Idol Abhijeet Sawant.

Joining hands with Abhijeet Sawant, Shahzeb Tejani makes strides with his new song titled Tera Rishta (check it out here), which is gradually touching the right chords of people’s hearts and compelling listeners to keep listening to the track more and more, which has what led the song garner enormous views and streams across streaming sites and platforms. Shahzeb Tejani highlights that the song which features him revolves around a street fighter and his heartbreak and how, in the midst of these challenging times, he also has to train to fight the champion of the fight club, played by Travius Garrett. The female lead of the song is Kiana Gaona, and it is excellently shot by director Harsh Mahadeshwar in Houston, Texas, the US, and Mumbai, India.

As a composer, songwriter, and singer, Shahzeb Tejani yet again proves with Tera Rishta what he is made of and the potential he has in him to soon reach the highest realms in the music world. He says that featuring a true talent and a renowned artist like Abhijeet Sawant was a huge responsibility for him, but with the latter’s support, the song is on its way to becoming a huge hit already.

Shahzeb Tejani and Abhijeet Sawant both have spread magic with this particular track.