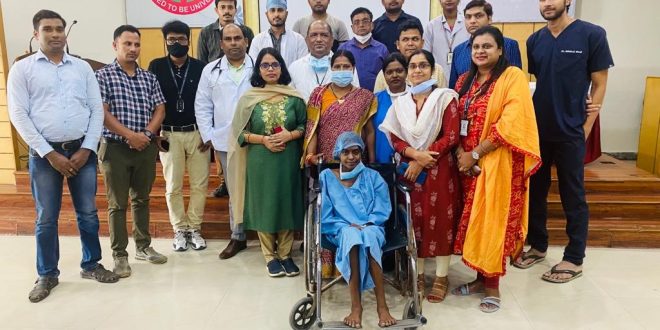 
Bhubaneswar: Surgeons at the Institute of Medical Sciences and SUM Hospital, faculty of medical sciences of SOA, have successfully removed a 3 kg tumour from the chest of a 23-year-old woman which had compressed her left lung and pushed the heart and windpipe to the right of the chest cavity.

After visiting few hospitals where she did not get any definitive treatment and her condition was dismissed as inoperable, Sonali Dalei came to IMS and SUM Hospital complaining of chest pain and breathlessness. She was dependent on external oxygen supply.

Her condition was initially evaluated by Dr. Soumya Surath Panda, Head of the department of Medical Oncology. A thorough examination revealed that the giant tumour was not cancerous but was an intrathoracic tumour which had compressed her left lung and pushed the mediastinum (heart and wind piple) towards the right of the chest cavity. She also had multiple neurofibroma over her face and hand, Dr. Debasish Sahu, Head of the department of Cardio Thoracic Vascular Surgery (CTVS), told newspersons on Monday.

A team of doctors led by Dr. Sahu decided to conduct the surgery though it was a difficult task to access the tumour and at the same time maintain the airway considering the extension of tumour and its compression effect. It was conducted with Dr. Sushanta Kumar Bhoi, Consultant Cardiac Anesthetist, being in charge of the anesthesia procedure.

The tumour was approached by Clamshell Thoractomy as also a Median Sternotomy with extension of the incision for complete removal of the tumour, he said.

Post operation, Dr. Shakti Bedanta Mishra and Dr. Sagarika Panda of the Critical Care department managed the patient. Her recovery took a long time as the drainage tube had to be kept for a protracted period because of frequent fluid accumulation. Besides, the left lung took a long time to expand after the tumour compression effect was released, Dr. Sahu said.

Dr. Panda described it as a multi-disciplinary effort as it was the success of a whole team comprising doctors from CTVS, Critical Care, Oncology and Plastic Surgery departments.           The hospital’s medical superintendent, Prof. (Dr.) Pusparaj Samantasinhar said that the surgery and the entire treatment were done under the BSKY insurance scheme.