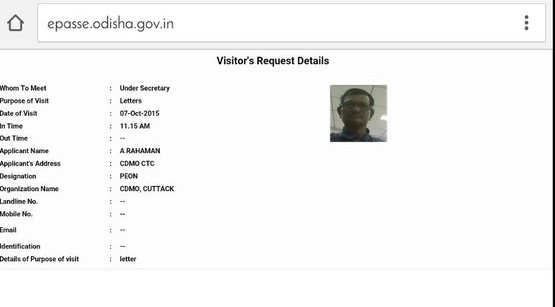 “A person named A Rehman had visited the Secretariat on October 7 at 11:15 pm. But he is not Abdul Rehman of Paschimma Kachha village in Cuttack. A Rehman works with the chief district medical officer, Cuttack as a peon,” Sharma told media persons here.

Sharma also informed that during interrogation, Rehman, who is currently on a 12-day remand with Delhi police, said he had never visited the state secretariat.

“The special cell of Delhi police informed us that Rehman revealed during interrogation that he never visited Odisha Secretariat,” Sharma said.

The opposition Congress and BJP on Thursday alleged that Rehman had visited the state Secretariat, and he had suspected link with the ruling party leaders including with some ministers.

What could have given credence to the visit of Rehman, his elder brother Tahir Ali claimed he is a BJD functionary, and his brother has been arrested to malign BJD and Odisha.