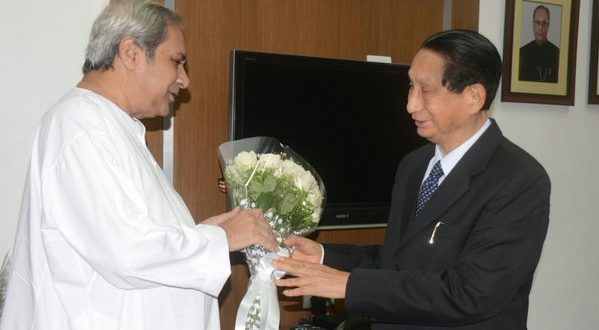 BHUBANESWAR: Lakhs of devotees including Odisha Chief Minister Naveen Patnaik, several ministers and lawmakers on Friday visited Sri Jagannath temple in Puri to seek the blessings of Lord Jagannath and his siblings on New Year day.

They visited the temple to have darshan hoping that the year will pass well for the state.

After offering prayer at the temple, the Chief Minister paid floral tribute to his father and former chief minister of Odisha Biju Patnaik at his memorial at Puri Swargadwar.

While hundreds of party leaders including ministers wished Naveen Patnaik at his residence, Patnaik met Governor S.C. Jamir at Raj Bhawan and greeted for the New Year.

Meanwhile, thousands of tourists from various parts of the country thronged the Puri town to usher in the new year and offered prayers at the 12th-century temple to begin their new year, while some arrived just to enjoy the year-end and beginning of 2016 on the beach.

The Odisha police have arranged elaborate security arrangement in the pilgrim town keeping an eye on possible terror attack and to have a smooth darshan of devotees in Jagannath temple.

50 platoons of police were deployed in the city. Six additional SPs and 18 DSPs were pressed into service to take stock of the security arrangements.

A similar crowd was also seen on the sea beach. Close circuit cameras were installed at strategic locations to monitor the crowd.

Apart from Puri, thousands thronged to Konark, the black pagoda. Thousands of tourists also flocked Chandrabhaga beach in the early hour to witness the first sunrise of the year.

Meanwhile, other political leaders also greeted the people of Odisha on New year.

Wish you and your family a very happy & prosperous new year. #Happy2016 pic.twitter.com/dLk0wu0HS3