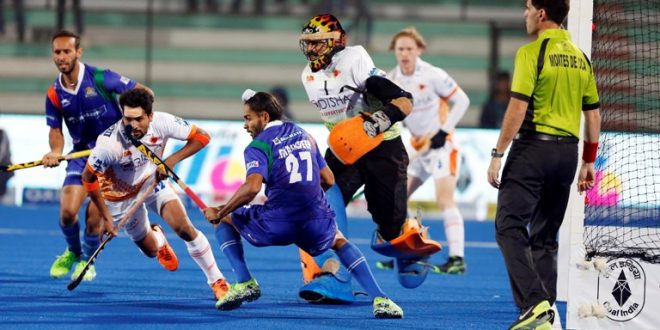 In a fiercely fought competition, the visitors came from behind to seal their second consecutive victory in the league. The 4th edition of the Coal India Hockey India League has seen some intense competition, a large part due to the new scoring system which has resulted in the display of some spectacular hockey over the last one week, and this was clearly visible in today’s game.

With this win, Kalinga Lancers now have 11 points in their kitty and share the top spot in the league table with Delhi Waveriders.

The first quarter of the match began at a very slow pace with the home team playing carefully after two straight losses against defending champions Ranchi Rays and Delhi Waveriders on home turf. Uttar Pradesh Wizards gradually started attacking the Lancers, and their efforts soon yielded results with the team being awarded a Penalty Stroke in the 14th minute.

Argentine star Gonzalo Peillat did not make any errors in converting the penalty stroke to give the home team a 2-0 lead. The second quarter saw Kalinga Lancers pressing hard on the home team, and they soon scored the equaliser in the 20th minute through a field goal from Aran Zalewski. The first half came to an end with a score of 2-2.

The third & fourth quarter saw the visitors attacking from the very first moment, and their efforts showed results when two back to back spectacular field goals in the 43rd and 45th through Glen Turner and Lalit Upadhyay ensured the visitors took control over the game with the scoreboard at 6-2 in their favour. The Kalinga Lancers did not stop at this, and Glen Turner scored again in the 47th minute converting a penalty stroke to take the score to an unassailable 10-2 in their favour. The Uttar Pradesh Wizards who after that tried hard to score failed in all their efforts.

The defence which lacked sheen today gave way again to the Lancers’ Dharamvir Singh in the 60thminute who made no errors in scoring one more goal for the visitors taking the score to 10-2 in favour of Kalinga Lancers. The match ended with the Uttar Pradesh Wizards losing their third consecutive match on their home ground.

The next match of the 4th Coal India Hockey India League will be played between the Defending Champions Ranchi Rays and League toppers Delhi Waveriders at the Astro Turf Hockey Stadium, Ranchi on 26th January 2016. The six-team annual franchise based hockey league, the flagship event of Hockey India – the apex body governing the sport in the country and sanctioned by the International Hockey Federation (FIH) is being played across six venues in India from 18th January – 21st February 2016.