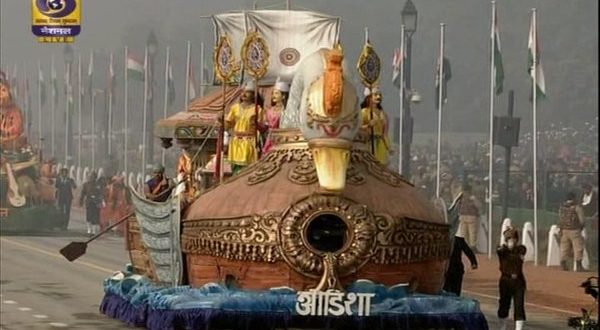 NEW DELHI/BHUBANESWAR: Odisha showcased its rich cultural heritage and maritime glory in the form of a tableau ‘Boita Bandan’ festival on Rajpath during the Republic Day parade in New Delhi on Tuesday.

Besides, the dignitaries gathered at Rajpath enjoyed ‘Dal khaire’, the captivating Sambalpuri folk dance of Western Odisha. The dance was performed by children.

The tableau of Odisha presents the maritime activities and glorious tradition of Boita-Bandana festival of ancient Odisha. This more or less concentrates around the Sadhava tradition in Odisha, who were great maritime traders and the tableau depicts their traditions. Life size fiber statues depicting Sadhavas with boxes (Sindhuks) meant for storage of goods and precious materials adorn this portion. The Trolley portion carries the boat house and Sadhavas depicting life activities of trade.

Ancient Odisha, popularly known as Kalinga was the epicenter of the inland and foreign trade. The geographical setting of the State had supported the development of seaports like Tamralipti, Chelitalo, Palur, Pithunda along its coastline.

The mariners of Kalinga were endowed with sound knowledge of navigation and had commercial, socio-cultural and political relations with South East Asian countries like Srilanka, Java, Sumatra, Bali, Borneo, China, Burma, Cambodia, Champa, Malaya and Thailand.

The tableau has been designed by senior artist Pradyumna Kumar Dash, while the 3D model has been prepared by Gajendra Kumar Sahoo, a faculty member of B K College of Art and Crafts. The tableau in the shape of a 45-ft-long floating boat has been built with iron, waterproof-ply, thermocol, pinewood and fibre. During the parade, about ten artistes dressed as marine traders (‘sadhaba pua’) will be on the boat, on which Rs 16 lakh has been spent.