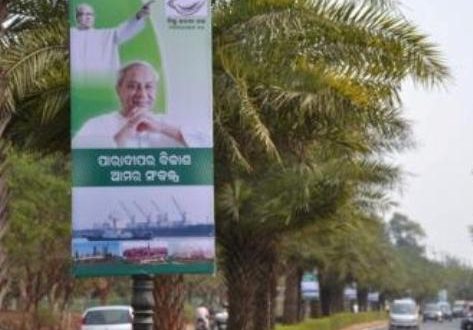 BHUBANESWAR: Just four days ahead of Prime Minister Narendra Modi’s visit to inaugurate IOCL’s oil refinery at Paradip, the ruling Biju Janata Dal (BJD) and opposition Bharatiya Janata Party (BJP) are engaged in a poster war in their bid to take credit for the grounding of the oil refinery.

The BJP has erected hoardings and posters with the photographs of Prime Minister Narendra Modi and other leaders of the party at various locations of the city while publishing advertisements in media in the name of Urja Divas.

Not leaving behind the opposition, the BJD has also started erecting posters with photographs of former Chief Minister Biju Patnaik, Chief Minister and party supremo Naveen Patnaik at various places in the city from Tuesday.

The posters carry the message that the BJD is dedicated to the development of Paradip.

The BJD leadership has directed all the party workers and MLAs in the Paradip area to erect maximum posters and banners at various places, particularly in the Bhubaneswar-Paradip road.

“There should be healthy competition among political parties for the development of the state and the country,” said BJP spokesperson Sajjan Sharma.

“People of the state know what BJD has done for Paradip in the last 15 years. It is good if their approach towards Paradip is now changing,” he said.

He said the BJD should not think that only the state government is contributing to the growth of the state, and it should also recognise the centre’s support. T

BJD spokesperson PK Deb rubbished Sharma’s allegations and said the ruling party is “not engaged in any poster war”.

“People also know what the BJP has done for the state and the development of Paradip,” he said.