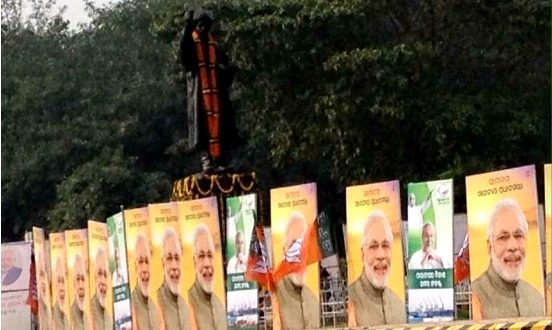 BHUBANESWAR: While the leaders are fighting at state capital over taking credit for the grounding of IOCL Refinery plant, the battle has now reached the streets of Paradip, where the issue originates.

The activists of the ruling BJD and BJP blocked roads in several parts of the port town after they locked horn each other over putting up posters and banners of Prime Minister Narendra Modi and Naveen Patnaik.

The workers entered into a clash with one group alleged that they were not allowed by the other to put posters at some specific locations in Paradip. First, they indulged in a war of words and later it turned into a minor clash near the entry point of the 15 million-tonne refinery. However, police intervened and pacified the agitating party workers.

Meanwhile, several ministers and leaders of ruling BJD have camped in Paradip to gather maximum people at the inaugural event of the refinery project to chant ‘Naveen Patnaik’.

Prime Minister Narendra Modi would inaugurate the project in the presence of Chief Minister Naveen Patnaik on February 7.

Not leaving behind its opponent, the BJP has also fanned out vehicles across the state to bring maximum people to the meeting venue to chant ‘Modi’.

Meanwhile, BJD on Friday lodged a police complaint after finding that the party’s posters for the February 7 event have been vandalised in some stretches in the capital city of Odisha here.

“The posters of our party in connection with the event have been damaged massively from Vani Vihar Square to Ram Mandir and in the Nandankanan stretch. Some posters near Kalpana Square have also been torn. We have filed two separate FIRs in this matter with the police. We want the cops to find out the culprits,” Bhubaneswar Municipal Corporation (BMC) mayor Anant Narayan Jena said.

The BJP, however, washed its hands off the whole affair and downplayed the entire matter.

“The party has nothing to do with the programme as it is an official event. The only thing is that since the Prime Minister belongs to the party, it is working hard to welcome the leader in a grand way,” BJP’s Odisha president Basant Panda said.