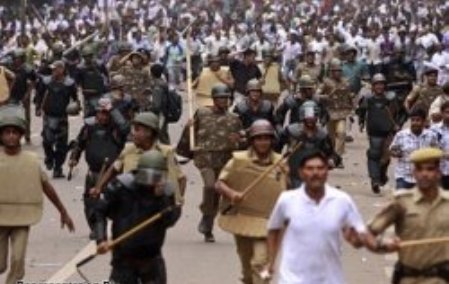 Police, teacher face off in Bhubaneswar

BHUBANESWAR: Sishu Bhawan Square in the capital city of Odisha on Friday turned into a pitched battle when over ten thousand of block grant teachers and police entered into a confrontation.

Police resorted to lathi charge to disburse the teachers trying march towards Naveen Niwas by breaking the barricade put up by the police.

Bhubaneswar DCP Satyabrat Bhoi said they were trying to pacify the agitating teachers and maintaining law and order.

The teachers, who are demanding their regularisation of the job, said the state government has been cheating them by giving false assurances.

Meanwhile, the teachers are trying to reach Naveen Niwas with groups while police are chasing them and resorting lathi charge.