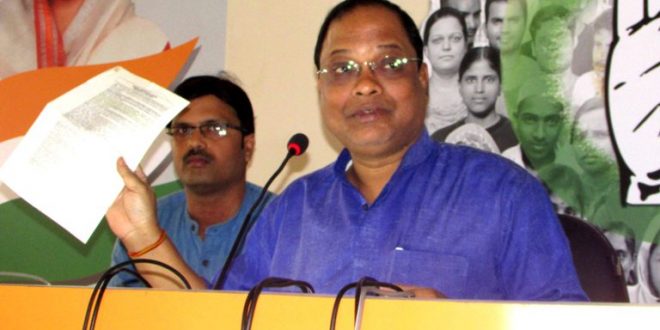 Congress, not BJP-BJD, contributed for grounding of Paradip refinery: Prasad

BJP government at centre and BJD government in the state wanted to dump the mega IOCL project for some reason or other in the past, he added.

He condemned both BJD and BJP for their struggle to claim a credit of establishing refinery.

“Evidentially, these two parties had played almost no role in erecting the oil refinery project at Paradip”, said Harichandan adding that credit of the project goes to the project affected people in particular and the people of Odisha in general, who would be losing revenue of Rs 24, 000 crores, in current prevailing price, in another 11 years starting from 2016-17 fiscal.

Acclaiming the role of the labourers, engineers and Indian Oil Corporation, Harichandan said that without the endeavour of them, the project couldn’t have seen the light of the day.

Harichandan said that during Narasimha Rao regime the project was conceptualised, and a decision had been taken to set up a 6 million tonne refinery by IOCL at Paradip.

The then Union Minister for Petroleum Captain Satish Sharma had communicated the decision to the then Chief Minister of Odisha. During Janaki Ballabh Patnaik’s rule in Odisha, IOCL released funds for land acquisition and the state government meticulously discharged its responsibilities about the acquisition of 3345 acres of land at Paradip, he added.

“Even as the foundation stone of the project was laid by former Prime Minister Atal Bihari Vajpayee in 2000, in 2002 the then Union petroleum minister Ram Naik, in reply to a question of BJD MP Bhartruhari Mahatab had said that due to lack of economic viability the refinery project at Paradip was not feasible,” informed Harichandan.

He further said that while there was uncertainty over the Paradip project, Vajpayee laid the foundation stone of another oil refinery project at Bina in Madhya Pradesh, creating much hue and cry in Odisha.

It was alleged in many quarters that the central government was ignoring Paradip refinery project in its coveted attempt to show favouritism to Reliance group.

“Due to an utter conspiracy of BJP and BJP then, the fate of the project had almost slipped into cold storage,” accused Harichandan.

However, the PCC president said that during UPA-1 in 2006, Paradip project was accorded top priority and a cabinet decision was taken to establish 15 million tonne refinery at a cost of Rs 35,554 crore there.
“And now when the project is completed both BJP and BJD are trying to take the credit of establishing the project, forgetting token courtesy in politics of Thanksgiving.”

In this context, Harichandan had ridiculed both BJP and BJD for quarrelling with each other to take credit for Paradip project, where they had little role to play. Further coming down heavily on BJP, Harichandan said the party is busy in hijacking the credit of Congress led UPA government in NISER matter.

NISER is another burning example where it is the UPA Government led by Manmohan Singh which not only sanctioned the project in Odisha but also gave all the money for building its new campus.

“It is only Dr Manmohan Singh who deserves whole credit for NISER to happen in Odisha,” said Harichandan.