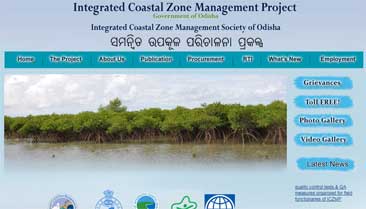 BHUBANESWAR: Appreciating the significant outcomes of the Integrated Coastal Zone Management (ICZM) Phase-I activities in Odisha, World Bank has offered its support for the extension of the project in the state.

This has been discussed in a high-level meeting held under the chairmanship of Chief Secretary Aditya Prasad Padhi here on Saturday.

P. Chaballero said that the outcomes of the ICZM interventions taken up during Phase-I in Odisha have been quite impressive and encouraging.

Padhi said that state would like to have World Bank support in the development of the infrastructure for the fishery, eco-tourism and livelihood promotion activities.

The Chief Secretary added that the best practices developed during Phase-I interventions should be replicated and scaled up during Phase-II of the project.

Available data shows that Odisha is one among three other states including Gujarat and West Bengal, which are implementing this kind of project.

In the performance outcome so far, Odisha is the leading state. Coastal Zone Management Society of Odisha has been formed under the chairmanship of Chief Secretary for monitoring the implementation of the project.

In the Phase-I, near about 180 km of coastal area has been covered under the project. The state government has proposed to extend the project to other 300 km of the coastal zone in the second phase.

The Phase-II proposal has been submitted to Government of India and the sanction of which is awaited.

The senior officers present at the meeting also raised the concern about the delay in the release of funds from the centre for implantation of Phase-I activities.

Available data shows, the Phase-I project period has been scheduled up to 2017 with a revised financial outlay of Rs. 334 Cr. The major interventions taken up in the project include strengthening of Wetland Research & Training Center at Chilika, protection measures for control of coastal erosion at Pentha in Kendrapara district, conservation of Biodiversity & Livelihood Security through eco-tourism, alternative livelihood for coastal fishermen, development of Participatory Ecotourism at Chilika and Tampara, establishment of Coastal Mitigation Laboratory at Paradip and Solid Waste Management Project at Paradip.

The activities are being implemented through 14 numbers of departments, urban local bodies and special agencies. So far, Rs.160 crore has been utilised. The annual action plan of Rs. 7853.91 lakhs has been prepared for 2015-16.