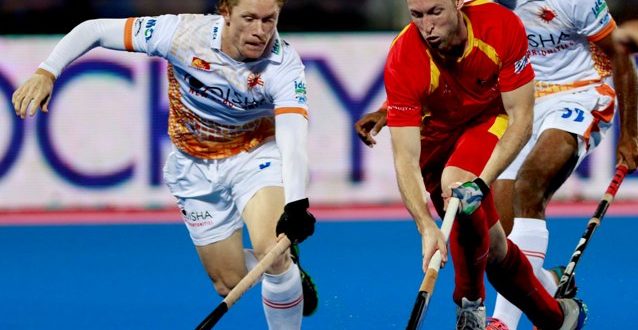 The brilliant field goal from Mohammad Amir Khan and a penalty corner ensured victory for Ranchi Rays. With the win, Ranchi zoomed to the top of the table relegating Lancers to the second position in the tournament.

From the beginning of the first quarter, Kalinga Lancers and Ranchi Rays started playing aggressively to edge out each other in the hard-fought battle to maintain their supremacy in the tournament.

The first goal of the match came from the stick of Dharamvir Singh, who smashed the ball between the legs of the goalkeeper to give a lead to the host team.

The field goal of Singh gave the Lancers a 2-0 lead in the match (one field goal is counted two goals). However, Ranchi Rays bounced back immediately and earned a penalty corner which was brilliantly capitalised by skipper Ashley Jackson.

Both the teams scored in the first quarter. But the host team were leading by 2-1.

The defending champion and host team were trying hard to find the net throughout the second quarter as their strikers opened a couple of chances to score. In the process, Lancers earned a penalty corner. But, they failed to capitalise on it. The second quarter remained goalless.

The third quarter also remained goalless as the defenders thwarted every move of the strikers. Both the teams were applying their every possible move to stay in the game.

With just a few seconds remaining to the end of third quarter, Ranchi earned a penalty corner only to be thwarted by Lancers’ goalkeeper Andrew Charter, who saved a couple of goals for the team in the match.

But, the defending champion again bounced back in the fourth quarter and produced a magnificent field goal putting behind Lancers in the goal fest.

The goal came from Mohammad Amir Khan giving a lead to Ranchi Rays. However, the host team earned a penalty corner hoping to level the score with the rival team. But, they failed to capitalise on it.