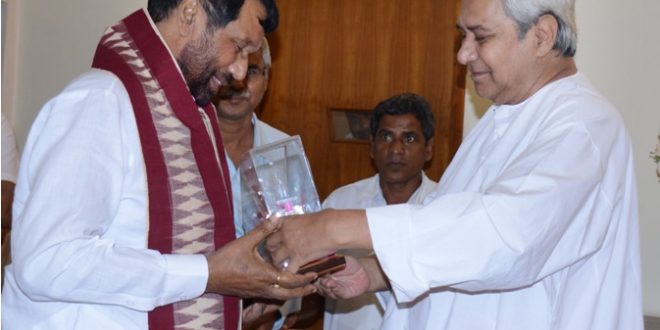 BHUBANESWAR: Union Consumer Affairs Minister Ram Vilas Paswan on Thursday assured that he will positively consider the demand of the Odisha government to provide more rice instead of wheat under the National Food Security Act (NFSA) being implemented in the state.

Paswan, who held a meeting with Chief Minister Naveen Patnaik over NFSA implementation, said demands of the state regarding the allocation of more rice instead of wheat would be considered positively.

He said Odisha also demanded supply of rice to inmates of SC/ST hostels at discounted rate.

The minister said he has received complaints regarding ration card irregularities in Odisha and assured to look into it.

Patnaik said Odisha was getting 1.43 lakh tonnes of rice and 26,000 tonnes of wheat to an 86:14 ratio before the implementation of NFSA in the state.

But, the state was now getting 1.27 lakh tonnes of rice and 34,000 tonnes of wheat after the implementation of the Act.

Informing Paswan that people of the state prefer rice to wheat, Patnaik urged the minister to allocate rice and wheat at the earlier ratio to the state.

Earlier, Patnaik had written a letter to Prime Minister Narendra Modi and Paswan demanding more rice and decrease in the wheat allocation for the state.

The chief minister informed that 80.05 lakh families (covering 298.5 lakh individuals) had been enrolled as Priority Households and Antyodaya Anna Yojana households under NFSA.