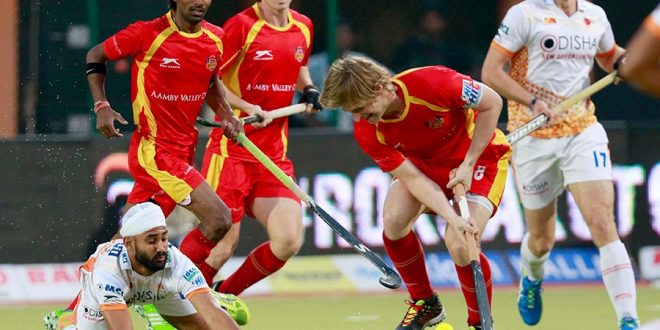 RANCHI: The second semi-final of the 4th Coal India Hockey India League ended in a nail-biting finish at the Astroturf Hockey Stadium in Ranchi.  Kalinga Lancers held their nerves to come out victorious in the match which was decided by a penalty shoot-out (4-2) after the score was tied at 2-2 at the end of the full time.

With this win, Kalinga Lancers booked their maiden final berth and will face two-time finalists Jaypee Punjab Warriors in the final at the same venue on February 21.

The first quarter of the second semi – final between defending champions Ranchi Rays and Kalinga Lancers started with the home team looking to gain the upper hand in the early moments of the game.

Ranchi made a few circle penetrations in the first 10 minutes of the game, but none of them converted into a goal because of a strong defence line of the Lancers. The first quarter ended with the score at 0-0. The second quarter saw Kalinga Lancers gain in confidence and also maintain higher ball possession. The Lancers got their first opportunity from a counter attack which was converted into a penalty corner in the 22nd minute, which was successfully converted by Gurjinder Singh giving them a 1-0 lead in the match.

The end moments of the second quarter saw some pressing game by Ranchi Rays but Kalinga Lancer’s defence held strong and the score at halftime stood at 1-0 in Kalinga’s favour.

The third quarter saw a slow start with most of the game being played on the midfield. Ranchi Rays, however, made some attacking moves which were beautifully defended by Kalinga Lancers.

The biggest opportunity of the quarter for Ranchi Rays came in the 37th minute through back to back penalty corners but spectacular saves by Andrew Charter ensured Kalinga Lancers held on to their lead at the end of the third quarter. The fourth quarter of the match as expected saw Ranchi Rays raising their game with successive attacks from the beginning.

The defending champions were also successful is claiming two back to back penalty corners in the 50th and 52nd minute but a super-efficient defensive line of Kalinga Lancers ensured the Rays cannot convert any into a goal.  The final five minutes of the match saw Ranchi Rays attacking vehemently to get a goal, and their efforts finally paid off in the 57th minute when Trent Mitton converted a penalty corner cleverly to equalise at a crucial moment.

Kalinga Lancers immediately launched a counter attack and were awarded a penalty corner in the 58th minute, and captain Moritz Fuerste made no mistakes in driving the ball into the back of the net. The goal re- established the one goal lead at 2-1 for Kalinga Lancers.

Ranchi Rays were in no mood to give away the match so easily and the last minute saw them get another lifeline in the form of a penalty corner which was beautifully converted by Timothy Deavin to level the score at 2-2 and take the match into a penalty shoot-out.

The shootout started on a low note for the Ranchi Rays as their captain Ashley Jackson missed the first one. Kalinga Lancers’ Captain scored his penalty shot to give the team 1-0 lead in the shoot-out.