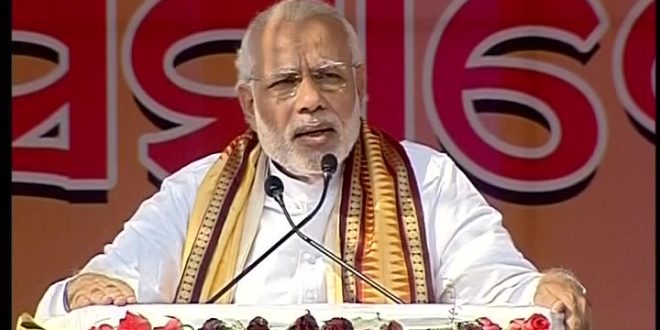 Conspiracy being hatched against my government: Modi

BHUBANESWAR: Prime Minister Narendra Modi on Sunday alleged that some NGOs and black-marketers were hatching a conspiracy to destabilise his government and defame him.

“Some people remain occupied with only mission of criticising my government from morning to evening. They could not digest the simple fact as to how a tea vendor went on to become Prime Minister. This has not gone down well with them,” said Modi addressing a farmer rally at the western Odisha town of Bargarh.

He said it does not go down well with some people that a “chai wala” (tea seller) has become the Prime Minister.

“Besides, I have done something which has made life difficult for many. Corrupts could no more indulge in fraudulent activities. Those who were involved in corruption became furious with me,” he added.

He made the remarks while talking about the neem-coating of urea being done to avoid its pilferage and routeing to chemical factories like in the past.

“In 2014, some chief ministers and MPs would write to me with one complaint- on urea availability. Now, I don’t get letters on urea related issues. There are no lathi charges and black market-related aspects ever since neem coating urea is produced,” said the Prime Minister.

“Neem coating of urea causes problems for some, but it will greatly benefit the farmers of my country. I know they are getting upset, but this nation cannot be looted and ruined. What we do troubles some but farmers will benefit from it,” said Modi.

The Prime Minister said that NGOs receive money from foreign countries, and his government was seeking the account.

“We said let it come but give the account of the funds received. The moment we started asking for accounts, they all got together and said ‘Modi ko Maaro’, ‘Modi ko Maaro’ (hit Modi), he is seeking accounts from us,” he said.
Modi asserted that “the country needs to know where the money that comes in is being spent. It is in the law.”

He said since the government started asking for accounts, they all (NGOs) got together and had been conspiring all the time how to finish Modi, how to remove Modi government and how to defame Modi.