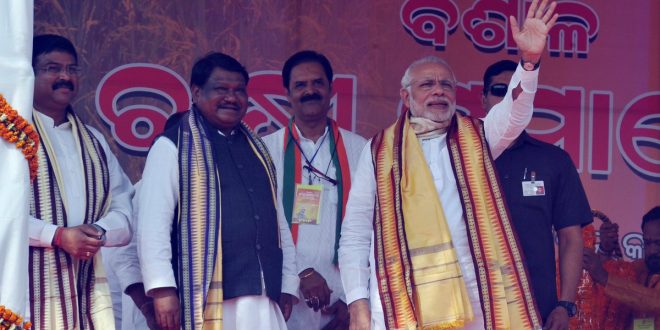 Grateful to CM for publicising my event: Modi

“I heard that chief minister (Naveen Patnaik) visited the area a few days back. I am grateful to him for publicising my programme,” Modi while addressing thousands of people at Bargarh here.

The Prime Minister also indirectly attacked the state government for not utilising the natural resources for the benefit of the state.

He also called upon the youths and farmers of Odisha to spread the information about the benefit of ‘Pradhan Mantri Fasal Bima Yojana (PMFBY)’ in every nook and corner of the State and asked the farmers to embrace the scheme to avoid untimely crop loss.

Modi said the new crop insurance scheme of the Centre is always with the farmers, and they should extract many benefits from it.

“After many rounds of discussion with insurance companies, farmers, agriculture scientists, we introduced the PMFBY, which was being welcomed by everyone including Opposition, farmers and State governments. This Yojana can provide full insurance cover to the farmers”, Modi said.