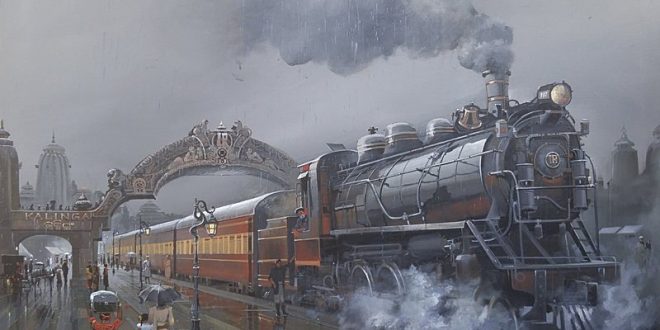 BHUBANESWAR: Bijay Biswal was an ordinary man until Prime Minister Narendra Modi made a special mention during his “Maan Ki Baat’ session on June 26 last year. Biswal, working as a travelling ticket examiner (TTE) with the Nagpur Division of the Indian railways, has turned the ordinary backdrop of his everyday life – trains, platforms and tracks into beautiful acrylic paintings.

Bijay Biswal, a self-trained artist born in 1964 in a small town of Pallahara in industrially developed Angul district of Odisha.

After getting a special mention in “Maan Ki Baat’ session, his paintings went viral on social media and soon became a household name in the country. Now, he is travelling to several cities showcasing his talent. He was recently felicitated in Bhubaneswar on the occasion of Nalco’s foundation day.

Biswal has captured the various facets of life in railways on paper using watercolours, charcoal and pens. His paintings were shared by Salem Division Southern Railway on their Facebook page.

As a child, he used to be a chalk addict, all the wall and floors of his house were covered with drawings made with chalk. He didn’t care much for a canvas or paint; the walls gave him a bigger surface to express his emotions, and the chalk gave him the fluidity. This didn’t make his parents happy; they wanted him to have a government job and find something more stable.

However, Biswal nurtured his talent even and showed people how he captured various faces of life in railways. (Pic sources from Biswal’s Facebook page)